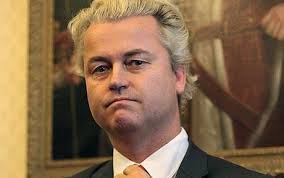 Wilders, leader of the Netherlands’ Party for Freedom, is suspected of racially insulting an entire population group and inciting discrimination and hatred, the Public Prosecution Service said in an online statement.

In March, the politician asked a crowd of supporters whether they wanted more or fewer Moroccans in the Netherlands, to which they repeatedly shouted, “Fewer, fewer.”

Wilders’ comments have triggered public outcry in the small European country, where more than 6,400 police reports and more than 15,000 discrimination reports were filed against him, prosecutor Alexandra Oswald said.

“This interrogation is one of the last steps in the investigation,” Oswald said in a statement. “After that, the prosecution will take the definitive decision whether or not to prosecute him.”

“While the whole world is going up in flames, public prosecutors are pointing their arrows at a representative of the people who is calling out the problems,” Wilders said in The Hague in response to the charges.

Wilders was acquitted of racism charges by an Amsterdam court in 2011.

Agnes Love Foundation Puts Smiles On the faces of widows