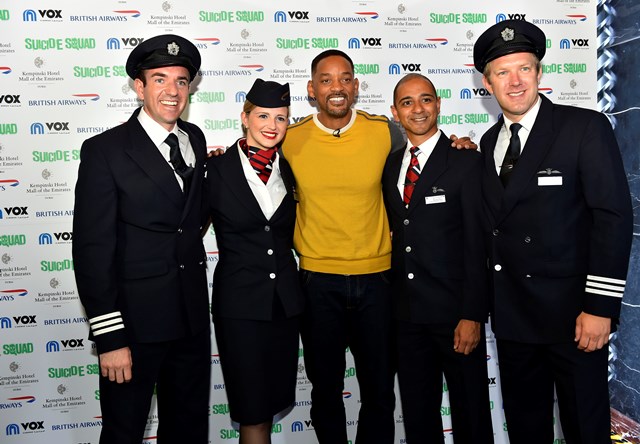 1 of 4
The event included a Q&A session in which the Academy Award nominee and four-time Grammy winner spoke about his role in the new action adventure movie, travel experiences and other insights.

The Hollywood icon, who stars as supervillain Deadshot in his most recent role, entertained 75 British Airways’ VIP guests during the exclusive session held at the Noir Lounge at Kempinski Hotel Mall of the Emirates. During the intimate Q&A session Smith talked with British Airways’ Senior First Officer & Assistant Pilot Recruitment Manager Andy Perkins and Senior First Officer Will Swinburn about preparing for such a character and which fellow Suicide Squad member he would most like to fly with.

Talking about his character in the movie, he noted that it made a good change to play a bad guy as he hadn’t played many in his career, and that playing Deadshot had been a fun role as he “wasn’t bound by morality”.

Smith, who has travelled extensively to promote the movie added that there are still destinations on his bucket list that he would like to visit or film in: “I would like to go to the Maldives and I haven’t done a lot in Indonesia. I would like to travel through there. Those are the top ones on my list.”

Talking about meeting the 47-year-old star, British Airways’ Andy Perkins said: “It’s not every day you get to interview a superstar like Will Smith. His films are enjoyed by British Airways passengers in the air every day of the week and I’m pleased to report that he was just as entertaining in real life.”

‎British Airways is offering fans of Suicide Squad a chance to explore some of the locations that the movie was filmed and the home of Hollywood’s stars, with flights to Toronto and Los Angeles for as little as AED 3030* and AED 3830*.

UAE residents can take advantage of the four daily flights from the UAE via London Heathrow’s Terminal 5 to North American destinations. In October the airline will be launching its newest aircraft, the Boeing 787-9 Dreamliner, on its Dubai to London service following its inauguration on the Abu Dhabi route earlier this year.