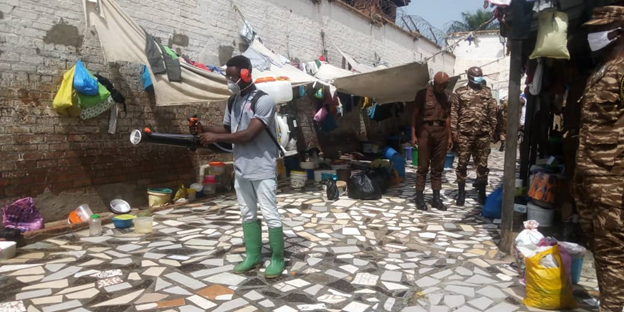 Willbeck Cleaning Solution, a cleaning service provider in Kumasi, has disinfected the Kumasi Central Prison as part of its social responsibility towards fighting the novel coronavirus.

A team of sprayers from the company, for over three hours, fumigated the entire prison yard including the rooms of inmates and barracks of warders.

Prior to the exercise, all the inmates were evacuated to the main yard of the prison to facilitate easy access to the nook and crannies of the facility by the sprayers.

Deputy Director of Prison (DDP) Samuel Owusu Amponsah, the Ashanti Regional Commander of Prisons, said the partnership between the Service and WillbecK Solution was critical to the fight against COVID-19.

He said it was one of the proactive steps being taken to protect the inmates from the disease as government stepped up efforts to contain the pandemic.

“Apart from the spraying exercise, we are also putting in place stringent measures to ensure the disease do not get into the prison”, he told the Ghana News Agency after the exercise.

He said entry of visitors into the prison had temporary been suspended to prevent a possible outbreak in the facility.

“We now collect any item brought to inmates by their families outside the prison, disinfect them before taking them to their owners”, DDP Amponsah disclosed.

He further said, “we do not want to take chances because if one inmate gets infected, the consequence could be very dire”.

He commended Willbeck Solution for their support and called on other corporate bodies and individuals doing donations during this period not to leave out inmates in various prisons.

Our Case Against NATO–Africans and the Struggle Against Imperialism