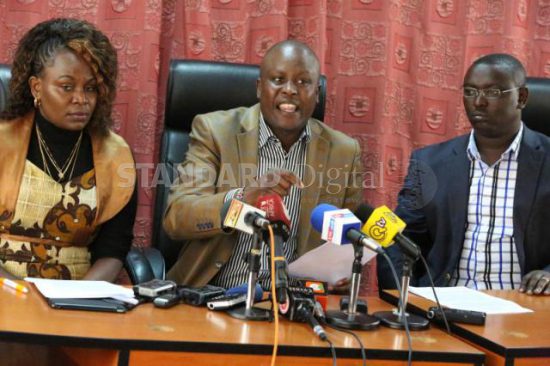 Trouble for Duale began this week when eight TNA MPs from Nyeri County vowed to push for his removal citing his failure to make public the list of terror financiers as pledged threatens the unity of Jubilee coalition.

Inside sources have informed The Standard that President Uhuru Kenyatta and Deputy President are held hostage by the demands of the legislators, who feel let down by majority leader.

Duale, who has remained a strong and fierce defender of the Jubilee administration, has been on the receiving end lately from MPs especially those from Central Kenya, where residents have lost their lives in terror attacks in North Eastern region.

Though Duale has downplayed threats by Kanini Kega (Kieni), Priscilla Nyokabi (Nyeri County Woman Representative) and Peter Weru (Mathira) and dismissed the MPs as political ?toddlers?, the Jubilee leadership is not leaving anything to chance.

The DP yesterday summoned four legislators to his official residence in Karen to talk them into dropping the motion.

However, some MPs who talked to The Standard on condition of anonymity have confirmed that their colleagues support the move.

?There is a general feeling among colleagues that the Majority Leader, apart from failing to fulfill his earlier promise to submit the list, took the country for granted and has remained unapologetic on the same,? said a Jubilee MP from Rift valley.

When contacted, Kega confirmed the meeting but did not diverge any further details.

But it has emerged that the DP was unable to strike a truce with the Nyeri MPs, who remained adamant on their plans to proceed with the censure motion, forcing him to postponed the meeting. Another meeting is scheduled today.

?The legislators canvassed a myriad of issues affecting the region. They put across their grievances, which they want the Jubilee administration to tackled,? said an MP from Central region.

He continued:?We cannot continue losing our people to Al-Shabaab.?

Close sources have affirmed that the motion is still on and the seven days? notice issued to Duale by Weru, Kega and Nyokabi lapses on Monday.

The MPs are planning to introduce the motion next Tuesday.

Kimani Ichung?wa (Kikuyu) yesterday denied knowledge of the meeting, but wasted no time in weighing in on the matter.

?Nobody is impeaching the Majority Leader. Call it a bluff. There is no way three MPs can purport to speak for an entire region,? said the legislator.

He continued: ?These people are advancing personal interests. We are focused on the unity of Jubilee and not to entertain issues that will create divisions amongst us. The war against terror should be collective.?

Ichung?wa stressed that nobody will speak on behalf of Central Kenya and cautioned his colleagues against escalating the matter.

?We know the forces the MPs are working for and we are not going to be part of their plot,? stressed the youthful MP.

The Standard has established that Duale has not taken the matter lying down and has shared his reservations with the President and DP.

He has even threatened to quit the Jubilee Alliance Party, if the Jubilee leadership fails to contain the situation, but the MPs could hear none of this.

By Roselyne Obala, The Standard