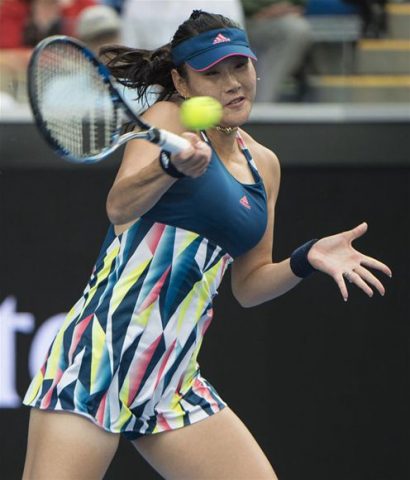 Duan Yingying returns a shot in the game.

China’s rising star Duan Yingying will work harder to be a genuine grand slam top 32 contender this season after going down in straight sets to Venus Williams in round three on Friday.

Despite her best ever performance at a grand slam, Duan leaves Melbourne after a disappointing 6-1, 6-0 round three loss where nerves and inconsistency gave the world No. 17 a comfortable progression to the fourth round in 59 minutes.

“I didn’t play that well today because Venus was really aggressive, she really attacked the ball,” Duan told reporters after the match, adding she was “a little bit nervous throughout the match because it was a big court.”

The match was played on Margaret Court Arena with seating capacity of 7500.

“I feel like some of the match I played ok, but still I feel like I need to learn from my opponent because we have some similar game,” Duan said.

“After the match my coach told me you need to learn from Venus because she is also play a very offensive game, play very fast, so that’s something you could learn from her.”

While Williams looked at ease on the court, she praised the “very competitive” world No. 86 as “you can see that she wants to win” .

“We had some really long games that I think were pivotal, very important for the match: two-Love in the first set, one-Love in the second set, we were just fighting back and forth,” Williams told reporters.

“This is her first time in the third round, it’s a lot of pressure.

“Having the opportunity to play this third round, play against a player of my experience, is going to be a huge stepping-stone for her.

Duan’s exit ends a mixed day for China after Peng Shuai and Zheng Saisai progressed into round three with their respective doubles pairing, while pairing Zhang Shuai and Australia’s Samantha Stosur went home in straight sets.

“I think I did really well this year, however there is some space I need to improve,” Zhang told reporters after her 6-1, 6-4 loss.

“Compare with the results, I attached more importance on the process. I am happy to say that I made progress during the past several matches.”