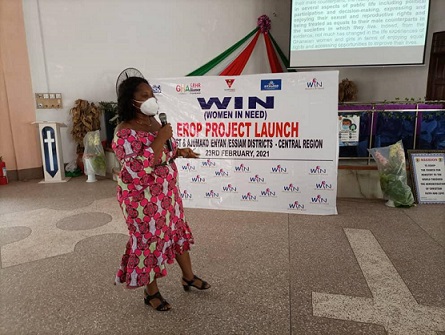 WIN, a Non-Governmental Organization (NGO) into Women empowerment has purposed to empower women and Girls in the Gomoa West and Ajumako-Enyan -Essiam Districts of the Central Region.

The projected initiative, it said would be achieved through its Equal Rights and Opportunity for Women and Girls project ( EROP) designed and funded by the Dutch Embassy in Ghana with the African Centre for Human Right and Sustainable development (AfCHurRSD).

The project expected to end in September this year is being implemented by members of the Ghana Sexual and Reproductive Health Right (SRHR) and WIN in the Northern, North East, Upper West, Upper East, and Central Regions.

Miss Susie Ama Korakoma Arku , the Executive Director of WIN, said the project was being implemented as a response to the numerous human right challenges women and girls face which impede the realization of their ambitions to live fulfilling lives.

She said the project would help such women access opportunities available through training in entrepreneurial skills and collaborate with Social Justice Institutions for the prevention of violence as they held duty bearers accountable.

Outdooring the project, Mrs Abigail Addo- Quaye, Programs Director said emanating from the misconception that women are weaker vessels who mostly experience gender-based violence, discrimination, inequality, and all forms of gender imbalances in the communities.

The project would help correct the wrongs in the districts, give women the voice and the power to take up opportunities that will equip them economically to better their livelihoods and give them a sense of meaning to life.

“We are targeting women and girls living with Human Immune Virus (HIV), those with disabilities, and those living in hard to reach areas in the region” she added.

Speaking on strategies for implementation, Mrs. Addo-Quaye indicated that they would develop a comprehensive educational package, set up EROP support teams and school clubs, and mobilize and form women groups for training.

Launching the project, Osabarimba Otsibu XI, Omanhen of Enyan Denkyira, said women were powerful instruments to national development and there was the need to equip them to use their innate talent to positively benefit all.

He urged stakeholders to support the project by contributing their bits to see what he called a ‘beautiful project” that would benefit deprived girls and vulnerable women in the selected districts.