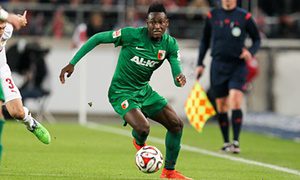 Ghana defender Baba Rahman will become one of Ghana?s highest earning footballers with the right-back earning nearly ?76,000 per week as he completes his move to English giants Chelsea.

The former Asante Kotoko defender will join the ranks of Asamoah Gyan, Andre Ayew and Kwadwo Asamoah as the highest earning Ghanaian players when he completes the deal to join Chelsea by Wednesday.

The conversion rate means he will earn nearly ?76,000 weekly excluding other bonuses and perks.

Whether it is a net figure or not, it still is a lot of money for a 21-year-old player coming from a small Bundesliga team Augsburg.

But given the urgency of Rahman?s transfer, one could argue that this is the way the market plays out.

Had Chelsea kept Filipe Luis around for a week or two to give themselves more leverage in the talks ? and an alternative if the deal fell through ? we could have had Baba Rahman for cheaper.