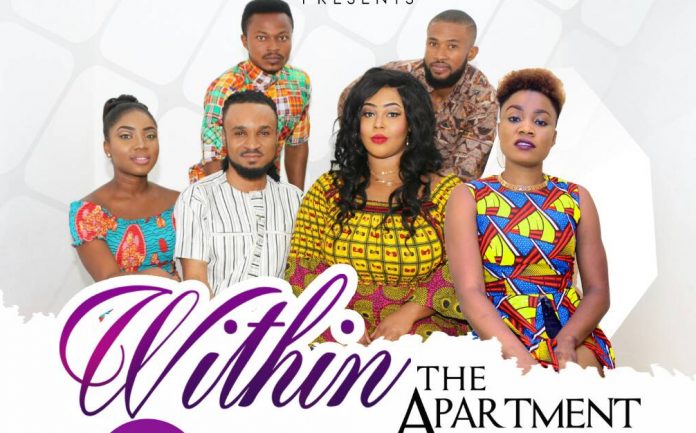 Another hilarious comedy Television series titled: “Within the Apart Apartment” is set to hit the Ghanaian screens on the 23rd of December 2017 at the West Hills Mall Waija, in Accra.

“Within the Apart Apartment” is a Ghanaian Television being produced by Joeve Media. To be candid, this is a TV series that one cannot resist since it is full of action and fun.

The hilarious comic drama is poised to fill audience with laughter while teaching them the need of tolerating one another in life regardless of their differences.

“Within the Apartment” is a comic drama which tells a story of five young students who finds themselves in one apartment and tries to live together regardless of their differences coupled with the presence of a divalicious house cleaner.

The Chief Executive Officer Joeve Media Mr. Essel and also the producer of the “Within the Apartment” Tv series, hinted that the Journey of the unique television series started couple of months ago and they have been able to win the hearts of their cherished viewers all around the country. Thanks to our amazing cast, crew and EBN TV.

The cast of this series include fast rising Ghanaian actors such as, Andy Tetteh, Nana Frema Koranteng, Charlotte Abakah, Amber Rose Agyemang Duah, Alex Lee as well as Asuama Inyang from Nigeria, Sandra Nanon from Gabon and kelvin Fnk from Nigeria among other. The new season has special appearances such as the multiple award-winning Aunty Paulina Oduro and Johnny B from THE USA.
The season one which started airing on EBN TV in September 2017 is schedule to climax in December 2017.

Selected episodes from season 2 will however be premiered on the 23rd of December 2017 at the west Hills Mall Waija from 6pm and 8pm,