The fourth prosecution witness in the case involving Gregory Afoko, who has been accused of the murder of former Upper East Regional Chairman of the New Patriotic Party, has ended his evidence in chief. 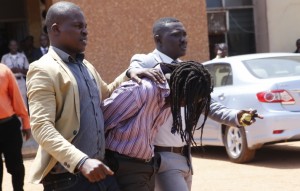 The witness, Mutala Taufic, continuing his evidence, told the court that he and Zakaria, used different motor bikes when they left the site for their various homes at about 2300 hours.

He said he received a called form the wife of Mr Adams when he got home at about 2330 hours, and so he rushed to the hospital.

He said at the hospital, six policemen arrived at around 0100 hours, based on the information they received about the incident.

“When we got there they inspected the crime scene, took pictures and Hajia Zainabu gave them the cloth and sandals of the deceased as well as a gallon.”

The witness said when they got there, the lights were still off, but the headlights of the deceased car were on. The front door was also opened and the glass rolled down.

He said they took the police to the Accused persons house, and on arrival, Hajia Zainab waited in the car while the policemen surrounded the house and knocked on the gate.

He said the police dropped him and Hajia Zainabu off, at the hospital and took Afoko away.

Later at the hospital family members of the deceased asked Hajia Zainabu to go home, so she left after which Mariama and Zuweira also left.

Mr Taufic told the court that after the three had left, Mr Adams was transferred from the emergency ward to the intensive care unit. Regional executive members of his party and some family members at about 0300 hours realized his condition was deteriorating so contacted some national executive members to provide a helicopter to transfer him to Accra.

He said while in the process, the doctor advised that, the arrangement be stopped since his condition was deteriorated.

He later died at about 0730 hours the next morning.

He told the court that he later gave his statement to the police.

During cross examination by the defence counsel, Mr Taufic said he gave his statement as well as phone number to the police on May 21, 2015.

When asked why, Zakaria did not come to the hospital throughout the period, he said that when he received the call, he was confused so he only managed to call the names of people that came to mind.

He said it was when Mr Adams was transferred to the intensive care unit that Zakaria who was staying far away Zuarungu came to mind so he called him and he came.

“I did not write the statement nor read it, but I signed.

He said he was not there when the substance was poured on Mr Adams, but the deceased narrated everything to him at the hospital in the presence of his wife, Zuweira, Mariama, Asigiri, one Razak, three nurses and other unknown persons.

The case was at this point adjourned to November 1, for continuation of cross examination by defence team of the accused.

At the previous sitting the prosecution presented their fourth witness.

They intend to call 11 other witnesses, in addition to Hajia Adams, Madam Issaka, Quinn and Taufic.

Gregory Afoko, a farmer, is alleged to have killed Mr Adams Mahama.

Afoko is being held on the charges of conspiracy to commit crime to wit murder and murder. However, he has pleaded not guilty before the Court, which is also composed of a seven-member jury.

It is alleged that Afoko carried out the act with one Alandgi Asabke, who is on the run.

A third accomplice, Musa Issa, was granted bail after the Attorney-General opined that there was not enough evidence to prosecute him.

The GNA earlier reported that on February 23, last year, an Accra District Court committed Afoko to stand trial at the High Court to answer to the charges against him.

The State at the committal proceedings tendered more than 17 exhibits in respect of the trial.

The exhibits include Afoko’s caution and charge statements as well as a post-mortem report of the deceased conducted by Dr Lawrence Edusei; a medical report on the deceased’s wife, who also sustained injuries in her bid to assist the deceased when the incident occurred.

Other exhibits are a gallon containing the alleged residue of acid found at the crime scene, a cup believed to have been used by the assailants in pouring the acid on the deceased, the deceased’s pair of shoes and attire and a piece of carpet in the deceased car.

The rest are various reports from the Ghana Standards Authority (GSA), a pair of blue-black track suit belonging to Afoko and photographs of the crime scene.

The Prosecution is being led by Mr Nicolas Amponsah, Chief State Attorney, who told the court that Mr Adams was a contractor and lives at the Bolgatanga SSNIT Flats in the Upper East Region and was also the NPP Regional Chairman.

According to Mr Amponsah, Afoko also lived in Bolgatanga and was the younger brother of Mr Paul Afoko, a former National Chairman of the NPP.

The State said the accused was also a party activist, and was close to Mr Adams.

The Chief State Attorney said he returned to the house in the night and at the entrance of his house, two men signaled him to roll down the window of his car.

He obliged, however, the two men poured acid on him and fled on a motorbike.

According to Mr Amponsah, Adams told his wife that it was Gregory and Asabke, who poured the acid on him.

He also mentioned the two accused persons, in the presence of neighbours, as the people who poured the acid on him.

Afoko was picked up at about 02:00 hours in his house and he led the Police to Asabke’s house. Asake was, however, not available.

A post mortem conducted on the deceased by Dr Edusei indicated that Mr Adams died of extensive acid burns.
GNA/Newsghana.com.gh