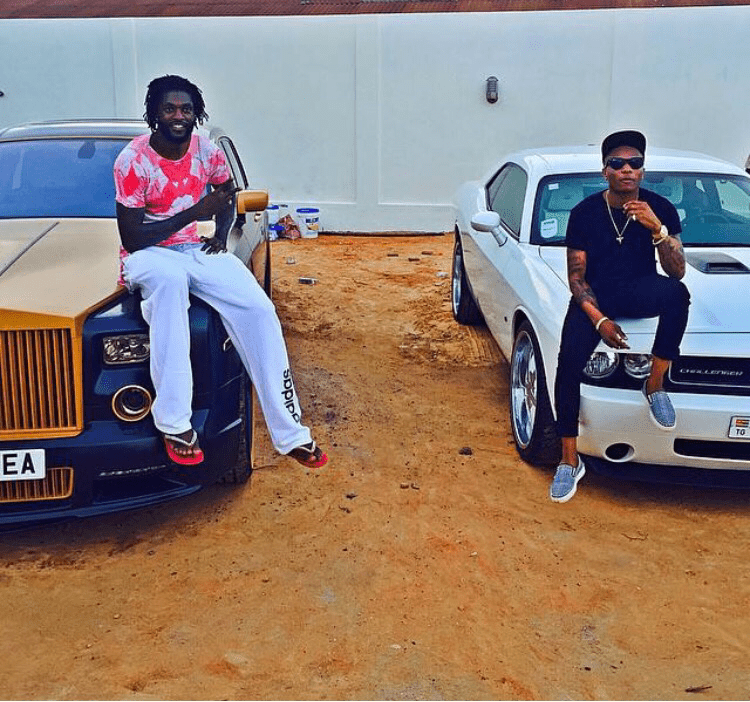 Nigerian pop sensation Wizkid and Togolese born Tottenham FC footballer Emmanuel Adebayor are having a swell time together in Togo. Here are some updates about what these two have been up to.

Wizkid, 24, is currently in Togo were he is scheduled to perform at a concert today. He shared photos of himself and his celebrity footballer pal Emmanuel Adebayor ?and captioned it; ?When Africans link up! My [email protected]_adebayor?showing me a good time!?#Togo?#Expensiveshit?.

The wealthy pair were spotted sitting on a Rolls Royce and a Chevrolet Camaro respectively. He was clearly excited to be in the company of the Togolese and tweeted :

Though Wizkid, real name Ayo Balogun, is in Togo, today is his girlfriend Tania Omotayo?s birthday.

Earlier on in the week, it was reported that Wizkid will be treating his girlfriend to a birthday vacation to an African country and the singer himself tweeted that his weekend was dedicated to Tania. So, we are guessing that Tania Omotayo is on the Togo trip as well.

Adebayor, who has been on compassionate leave from his club after a much-publicised family scandal that almost led him to commit suicide, is taking time off to heal with good friends. Just a few weeks ago, he and singer Mr MayD were having some guy time.

Emmanuel Adebayor is one proud daddy, he also took to social media to celebrate someone he loves. The?31-year-old Tottenham FC player took to Instagram to celebrate his daughter Kendra who turned 5. SEA, just like everyday, today is a special day for my daughter Kendra. Happy Birthday to the child who stole my heart, and who has kept it all these years. Don?t worry about returning it; it?s happy where it is.