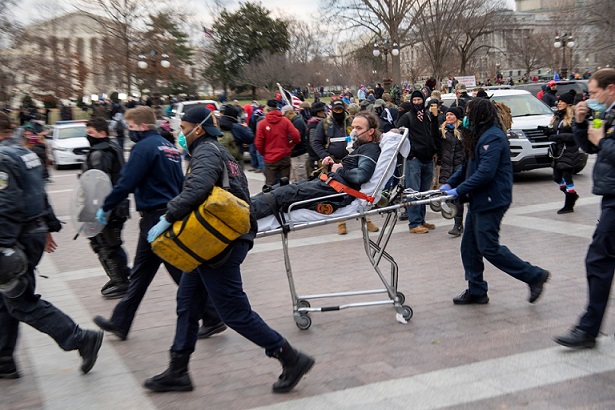 dpa/GNA – The woman shot and killed inside the US Capitol Building during a violent pro-Trump siege Wednesday was a resident of San Diego’s Ocean Beach, according to her extended family and media reports.

Her husband confirmed to KUSI-TV that the woman, whose shooting was captured on video, was 35-year-old Ashli Elizabeth Babbitt, and said she was an Air Force veteran.

A family member who said they saw videos of the shooting — the bystander footage has flooded the internet — and are convinced that the woman was Babbitt.

“No one has contacted us,” the family member said. “No official person has gotten back to us despite the many phone calls.”

Videos showing the encounter quickly spread online. One shows several people at the doors of the speaker’s lobby, a hallway leading to the House chamber. The top half of the doors are made of glass, and the doors look to be barricaded on the inside with chairs and tables. A few people in the crowd beat the panes until they break.

A person started to climb through a broken window. A single gunshot cracks, and the person — a woman — falls to the floor. Others surround her, and some shout for help.

Shortly after KUSI first reported her name, a Facebook profile for Babbitt listed the name of her current husband. Later Wednesday evening, the profile had been changed, and his name removed.

Reporters and cameras crews gathered outside the couple’s home into the night. Business records show Babbitt was the CEO of Fowler’s Pool Service & Supply Inc. in Spring Valley. Her husband is listed as the company’s chief financial officer.

In an email Wednesday evening, Babbitt’s ex-husband, Timothy McEntee, called her “a wonderful woman with a big heart and a strong mind.” McEntee said he and Babbitt were married from April 2005 until May 2019. Her Facebook page indicates she remarried that year.

“I am in a state of shock and feel absolutely terrible for her family,” McEntee wrote. “She loved America with all her heart. It’s truly a sad day.”

McEntee and Babbitt served together in the U.S. Air Force while married. McEntee wrote that he instantly recognized Babbitt when he saw a photo of the woman who was shot.

“(I) immediately knew it was her but was unaware she was in town so I initially had doubts because she lives in California,” McEntee wrote. “But (I) reached out to a friend and he said she was in town for the rally.”

Her Twitter account included a photo posted in September of her in a “We are Q” shirt in front of a harbor, with hashtags that included #TrumpBoatParade2020.

The post also included the initialism WWG1WGA — “Where we go one, we go all,” — used by followers of QAnon, which promotes baseless conspiracy theories.