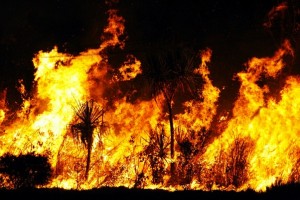 Women in Sandema in the Builsa-North district have condemned the rate of bush burning in the area and said the annual practice had a toll on their economic activities.

Madam Alangguoh Kaba, 55 year old and a trader from Chiana in the Kassena-Nankana West District who trades in straw and a weaver of local mats at the Sandema market said their sources of income was dwindling due to the lack of raw material they obtained from the forest areas and bushes.

Madam Kaba said increasing burning activities made it difficult for the straw to be obtained from the dealers and indicated that the sources of the straw which were from sieniensi, Kaapuusa and Kaasa among other areas have been threatened.
She expressed her worry at the Sandema market in an interview with the Ghana News Agency where she and her colleagues in similar business had gone to sell their wares.

She also noted the extinction of some elements of traditions in the Builsa area such as funerals and marriages where straw products, especially the local straw mats were used and indicated that the scarcity in finding the raw material, consistently impacted on prices of the finished products.

Madam Ayeriwe Ajanaga, 38, also a trader in the straw business reiterated that incomes from the business supported her and her seven children and called on the District Assembly, the youth and the chiefs to intervene in checking the rate of burning of bushes.

She noted that this would not only sustain them in the business but would provide women in the trade regular income that would keep their families.

She noted that, she and her colleagues were unable to purchase required quantities of straw when they trek to the markets because their fares and other expenditure affected their income and profit margins.