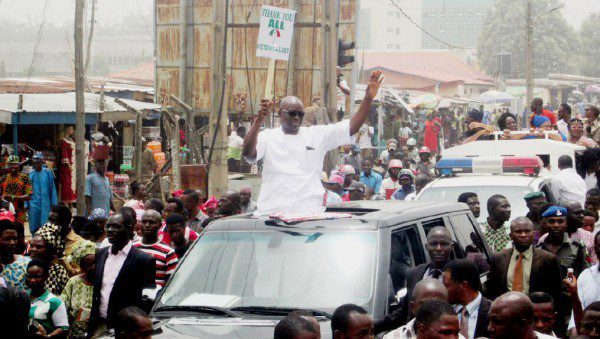 The impeachment saga in Ekiti has continue to degenerate as women in Ikere Ekiti, the hometown of Governor Fayose`s Deputy Governor, Dr Olusola Eleka on Wednesday staged a peaceful protest against the plot, issuing a 7-day ultimatum to the All Progressives Lawmakers to back out or would invoke the gods against them.

Similarly, Ekiti Elders had promised to summon Fayose and the 19 APC lawmakers to a truce parley to resolve the crisis, saying the efforts became imperative to avert further violence in the State, in spite of the pendency of the case instituted by the Speaker, Hon Adewale Omirin against his impeachment.

The women in their hundreds started the protest as early as 5am at Oke Oja Area and danced round the town, chanting anti-lawmakers songs, warning that any attempt to impeach Fayose would provoke violence in the State.

Briefing newsmen after the protest, the spokesman of the group, Mrs Mojisola Ogunjemilua, lamented that the violence against Fayose was a direct confrontation against the people of Ikere Ekiti, where the Deputy Governor, Dr Olubunmi Olusola, hails from.

?Why is it that trouble will always come when Ikere son is in?Government? Former Governor of the old Ondo State, Evang Bamidele Olumilua was not allowed to complete his term due to military usurpation .

?When Mr Abiodun Aluko and Bisi Omoyeni were also elected the Deputy Governors at different times in Ekiti under democratic setting, the two were not allowed to complete their terms and now Dr Olusola. Fayose himself , who is from Afao Ekiti shared historical connection with Ikere Ekiti .

?All we want in Ekiti is peace and we are calling on the lawmakers,?particularly the two of them from Ikere constituencies to back out of?the impeachment within seven days , failing which we will invite the?gods to intervene and this will be disastrous?, she said.

The Regent of Ikere community, Ayooye Adegboye-Oyinlola , while?addressing the protesters , applauded them for their peaceful dispositions and urged the lawmakers to embrace the olive branch
stretched to them by Fayose, for Ekiti to be in peace.

The Regent expressed elation that the kernel of the protest has been for the restoration of peace in the State, calling on all stakeholders to listen to the women for development to be achievable in the State.

A press statement signed by the Chairman of the Ekiti Council of?Elders, Prof Tunde Oluwasanmi and presented by the Chairman Committee?For the creation of Ekiti State, Chief Deji Fasuan , begged the?feuding groups to refrain from portraying Ekiti as a beleaguered?State and disallow external forces from intervening in Ekiti affairs.?The Council said the pendency of the case instituted by Omirin against?his impeachment has been stalling their interference to settling the?intractable crisis, saying ?we get stuck , likewise our Obas each time?we make efforts to settle this matter, but we will continue to sa?the truth.

?Not that we had not put in efforts in the past to broker truce
between the two warring groups. We had even gone further by appealing to our royal fathers, who continue to command regards and high respect in our society to intervene.

?Unfortunately we had failed in all these previous endeavours due to?the apparent refusal of our difficult sons and daughters who are?operating in the political space.

?We are now for the umpteenth time appealing to all politicians ,?especially those in government and the opposition in Ekiti State to?bury the hatchet , think about our people whom they are serving and?give peace a chance.

?Even our detractors , even in the Yoruba heartland and nation are?laughing at us, remembering the inglorious wet-e dais in the old?Western Region of Nigeria. At that time, much of the trauma and?dislocation was borne in Ekiti than any part of the region, including?Lagos. So, was also our experience during Ajasin and Omoboriowo?struggle in 1983.

?In furtherance of our efforts and belief , we hereby renew our call?for our brothers who are the combatants in this State to attend to?another meeting which we are calling shortly?, the Council stated.