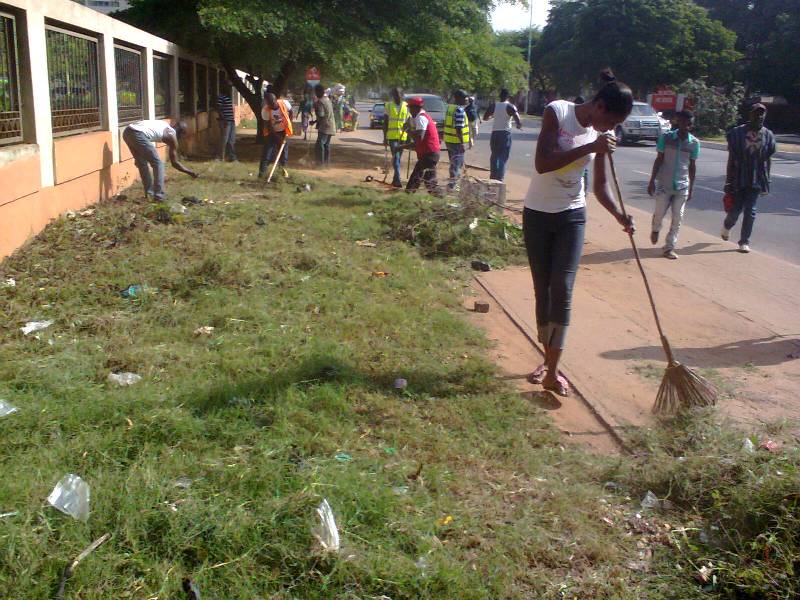 Women of Africa Foundation has launched a one week clean-up exercise at Ahwiam in the Ningo-Prampram District to help clean the filth that has engulfed the environment.

The Spanish non-governmental organization, in collaboration with Women in Law and Development in Africa (WiLDAF) as implementing partners and Zoomlion, embarked on the project to educate the people on the need for a healthy environment.

Ms Alicia Cebada, Project Coordinator Women of Africa Foundation, said Ahwiam, just as any community in Ghana, had a rapid growing population with serious problems of sanitation, thus it was important to educate the people to know the repercussions of keeping an unclean environment.

She said to improve cleanliness and solid waste collection in the community, it was necessary to draw an action plan to bolster the existing infrastructure and implement concrete measures that would improve sanitation as well as the standard of living of the people.

The theme for the project: ?Painting Africa: Africa Women against Malaria,? is to combine culture and art to sell good sanitation messages for the well-being of the people.

Mrs Bernice Sam, WiLDAF former Head, said it was important for people to ensure a clean environment for a healthy living, so that children would be able to do well in school and enable parents earn more from their petty trade.

She said cleanliness wass the responsibility of all and not just women, urging the married women to also take this cleanliness to their homes and train their children to adopt good morals for national development.

Nene Tetteh Mee III, Chief of Ahwiam thanked the NGOs for their intervention, stating that this would improve the sanitation problem in the community.

He assured the NGOs that he would make sure the people follow the education given them to sustain the project.

Alhaji Sarachk Nartey, the District Chief Executive, thanked the NGOs for their intervention, adding this would improve the sanitation issues in the community.

He said cleanliness is an important issue in Ghana thus it beholds on all to ensure that they played their role to ensure this project brought to the community would not be a waste of resources and time.

Alhaji Nartey advised the people to make good use of the waste equipment provided so that the community would at all time be clean to prevent cholera and other communicable diseases.

Mr Godfred Teye, Senior Operations Officer Zoomlion, stated that the people contribute most to the current problems relating to sanitation and waste management in the community and the country at large.

He said the Zoomlion had come to help for a clean community to minimize the rate of disease in the area.

Mr Teye therefore urged them to change their attitudes towards cleanliness by starting from their homes and throw their rubbish at the right place so that together they would sustain the good works of the NGOs to improve on their lives.

The community was provided four waste containers to aid their rubbish collection.

The Women of Africa Foundation is a private organization. It was founded with the intention of becoming an exemplary body in Spain and internationally with its commitment to sustainable economic and social development, human rights, peace, justice and dignity for people and especially for women and girls in Africa.

WiLDAF Ghana Acknowledges Sophia Akuffo on Her Appointment as CJ