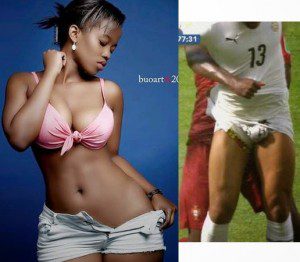 Corazon want to have a bit of the Ayew

Jordan Ayew?s has been driving women crazy with his big manhood even before Afriyie Acquah?s wife confirmed that the size of the schlong of the Aston Villa striker is outrageous and throat-chocking.

However Ayew has been causing a stir among women for some time now. And local television presenter Afia Schwarzenger also wants to taste.

Ayew caused ripples in the world when he accidentally flashed his manhood live on TV during a tussle with Portuguese midfielder William Carvalho at the 2014 World Cup.

Kenya?s most well endowed socialite CORAZON KWAMBOKA wasn?t left behind when she revealed that she was really salivating over what she saw from the guy.

She said; ?Mcm.. av been told he is ayew rather than Gyan.. not my biz though.. I have a crush on a certain part of his body.?

Ayew bedded an international team-mate?s wife for four years, according to a leaked tape.

The woman said to be Amanda Acquah claims in the recording that is the talk of football: ?I f***** Jordan for four good years, not four days. He sent me naked pics.

?He has slept with me more than Acquah.?

She says the striker ?intensely humped? her for four years.

Amanda wed Acquah, also 23, last year. The alleged relationship with striker Ayew is said to have taken place before that.

Counsellor calls on government to address high drop out among boy