The Women in Leadership International (WILI) Ghana, on Thursday, embarked on a march through some principal streets of Accra to advocate for peace before, during and after the December 7, general elections.

The peace march dubbed: “All Women and Youth Call for Peace,” was a measure adopted by WILI and other civil society organisations, to join the many voices calling for peace in the upcoming polls.

Some of the placards read: ‘Ballots, not Bullets, Vote for Peace, ‘Campaign for Your Party, but Apply Wisdom’, ‘Women, We Stand for Peace’, ‘Peace in Ourselves, Peace in the World’, ‘Zero Tolerance for Electoral Violence’ and ‘We Need Peace in Ghana’.

The Reverend Dr Nanayaa Owusu-Prempeh, the President, WILI, said at the moment the nation was going through ‘not normal times’ and the tension arising from the upcoming general elections had made it worse.

Advising politicians against conflict-generating utterances, she said it took one voice to generate conflict and one voice to maintain peace.

Dr Prempeh advised the public to go out peacefully to vote on Election Day, bearing in mind the importance of the peace the nation enjoyed.

“We don’t want any vigilantism or macho men. There are security personnel and representatives of the political parties around to ensure peace, orderliness and fairness.

“Peace is not expensive but war or chaos is expensive. When you don’t have peace that is when you will appreciate the peace you once had,” he added.

Madam Mercy Osei-Konadu, the Country Director, WILI Ghana, said the peace march was also to amplify the voices of women and young people and persons with a disability, who were the most affected whenever there was chaos or war.

She explained that elections were not for war but a peaceful change of government and advised Ghanaians to maintain the positive name the country had received globally as the haven of peace.

Mrs Theodora Anti, the Programmes Manager, FOSDA, said women in many instances or homes were the bread-winners, however, they were also the most who suffered in times of conflict.

This only means, the lives of many who depended on women, would be affected.

“It is, therefore, important that as women and young ones, we add our voices to the call for peace,” she added. 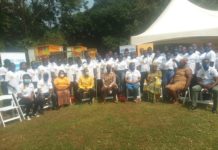