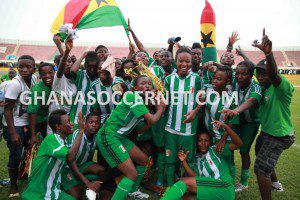 Defending Champions Hasaacas Ladies will take on Ampem Darkoa Ladies in the play-off of the Women’s League on Sunday to determine the winner of the 2015 Women’s League Championship.

The game which will be played on Sunday, 27th December, 2015 at the Tema Stadium is expected to provide spectators with a sumptuous encounter as Ampem Darkoa Ladies are poised to dethrone defending champions Hasaacas Ladies.

Hasaacas Ladies topped the Southern Zone with nineteen points from ten matches scoring ten goals and conceding six in the process while Ampem Darkoa beat off competition from favourites Fabulous Ladies to top the Northern Zone with 22.

Blessed Ladies and Dreamz have been relegated from the two zones respectively while Lepo Ladies and Immigration Ladies will remain in the League until the new qualification format will be announced in due course.