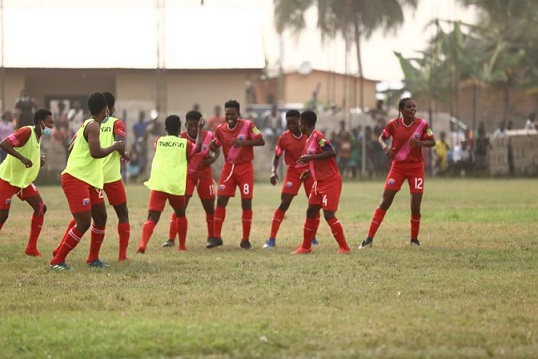 Berry Ladies, having won two matches and currently sits at the top of the league log would like to continue their winning spree when they come up against Sealions who are without points after two games at the Madina Zongo AstroTurf in Accra.

Having begun the league on a flying start, a win against the visitors, Sea Lions would put Berry Ladies on three wins and would worsen the plight of the opponent at the bottom.

Coach Mercy Quarcoo-Tagoe, trainer of Berry Ladies told the GNA Sports on Thursday that, her charges were ready and training intensively to add Sea Lions to the list of defeated opponents this season.

In the past, meetings between the two teams have always ended in victory for Berry Ladies and Coach Quarcoo-Tagoe said her ladies were leaving nothing to chance ahead of the clash

“We have prepared for this match and thankfully, we have no injury situation in the team, and come Saturday, our fans should know that we would beat Sea Lions again. We are the best team and we are focused to win,” she said.

Coming into the game, Berry Ladies beat Soccer Intellectuals away by a 3-1 score-line, courtesy a hat-trick from Felicity Asante whilst their opponent lost to Police Ladies by a lone goal. On paper, the homers have proved a tough team this season, and Sealions would map up a strategy to likely pick their first point of the season.

Also in the Southern Zone, another giant in the league, Police Ladies would face Soccer Intellectuals at the McDan La Town Park in Accra on Sunday, January 31.

Police Ladies who are with four points from the first two games would battle contenders, the Soccer lads, currently sitting in the fifth position on the league log whilst Hassacas faces Edna Quagraine’s team, the Thunder Queens.

In the Northern Zone, Fabulous Ladies who have one point out of a possible six would welcome second placed Ampem Darkoa, whilst Prison Ladies take on Northern ladies who are without their star player, Mukarama Abdulai.