The various league centers will be the center of attraction as the Women’s Premier League clubs are poised for action as the 2020/2021 season kicks off on Saturday, January 16.

It would be a thrilling moment for stakeholders of Women football on match-day one as they usher in the new season.

On paper, Coach Quarcoo-Tagoe’s charges appear superior though they would be coming up against an experienced side who have Black Queens’ players including Patricia Mantey, Faustina Kyereme, in their set up.

In the truncated league due to the global pandemic, Immigration ladies won a game, lost three and drew three whilst Berry ladies can boast of winning one, drawing four and losing one to stay on the 4th position out of eight clubs in the zone.

Going into the season, Berry Ladies signed Nagbekan N-Nyanyimaya, Victoria Osei, Philomena Abakah and Thelma Baffour Atuah to beef up squad in its quest to reach the set target of the club and they boast of national team players like Abigail Tawiah Mensah and Grace Adams.

Elsewhere at the McDan La Town Park, Police Ladies who were impressive in the last outing would come up against Samaria Ladies, now Thunder FC.

The duel is a tricky one considering Thunder FC hiring the services of former U-20 National female team assistant coach, Edna Quagraine to lead the team. Both teams would be at each other’s neck to seal victory in a move to begin the season on a bright note.

Quagraine would on Sunday, have a herculean task to prove her superiority over favourites Police Ladies for the maximum points.

At the Robert Mensah Sports Stadium, Hassacas Ladies would play guest to Lady Strikers. In the last season when the two teams met, the homers suffered their heaviest defeat in the league to Hassacas with a 0-9 thumping.

Marching onto the pitch, the encounter would be match fit for the gods with skillful players like Ellen Coleman, Suzzy Dede Teye, Gladys Amfobea, Faustina Acquah facing gallant defenders Janet Egyir and Linda Eshun, with Milot Abena Pokuaa and Doris Boaduwaa who excelled at the 2018 U-17 World Cup leading the attack.

At the Ajumako-Asassan Park, Soccer Intellectuals would face Sealions.

Another fierce battle would be where Ashtown Ladies host Northern Ladies who will be chasing to be a strong contender this season under Coach Alex Kamara as compared to last season. 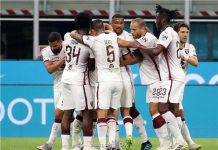 Coronavirus cluster at Torino may cause cancellation of games