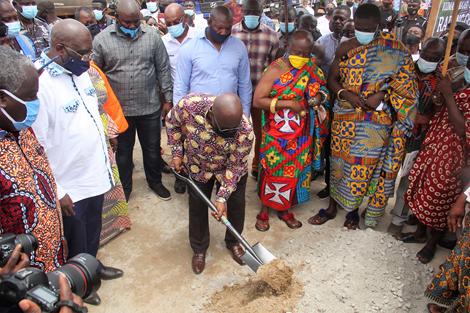 President Nana Addo Dankwa Akufo-Addo has said the massive investment by his Administration in the railway sector was to ensure speedy economic growth.

More than 200 kilometres of standard gauge railway lines had been constructed over the last three years across the country.

According to the Ministry of Railways Development, close to about US$2 billion was being invested by the government to upgrade railway lines in Ghana.

The move tied in with the Ghana Industrialization Project, under which many infrastructural facilities were lined up for execution to bring prosperity to the people.

President Nana Akufo-Addo, who was cutting the sod at Kaase for the commencement of the construction of the first phase of the Kumasi-Obuasi section of the new standard gauge railway line, indicated that the investment made by the government was worth it.

The scope of works under the project, being undertaken by Messrs David Walter Company Limited, includes the construction of a double-track standard gauge railway line from Kumasi to Kaase.

This consists of earthworks, culverts and bridges for drainage and other hydraulic structures, grade separation, slope protection works, fencing and access roads.

There would also be station buildings constructed in Kumasi, Kaase, Asafo and Asokwa.

Mr Joe Ghartey, Minister of Railways Development, described as unprecedented the huge investment made in the railway sector.

The government, he said, was committed to expanding railway lines across the country to accelerate socio-economic growth.

Otumfuo Osei Tutu II, Asantehene, in a speech read on his behalf, stressed the need for the government to complete development projects it had started in the Ashanti to bring benefits to the citizenry.