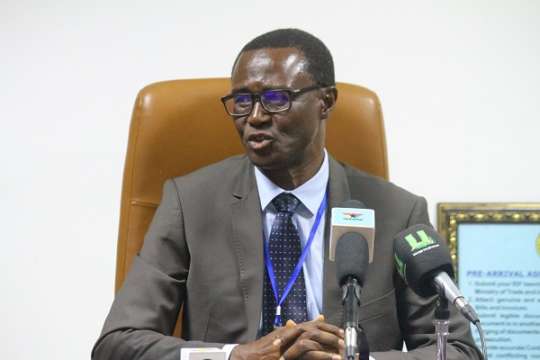 The Commissioner-General of GRA, Rev Dr. Ammishaddai Owusu-Amoah, says Revenue authorities will need to work with Ministries of Finance to fill in the revenue losses expected from the lowering of import duties in the implementation of the AfCFTA.

The parties in the AfCFTA will have to reduce tariffs on “90% of goods that are traded within the continent” and this may result in short-term tariff revenue loss to most African member countries where trade taxes remain a key source of revenue.

He said the execution of the AfCFTA would require technical skills, enhanced processes, and the use of technology by cooperating with competent authorities such as the Ministry of Trade, Customs authorities, tax authorities, and other law enforcement agencies involved in detecting various financial and customs-related crimes.

He said as African Countries began trading under AfCFTA, they must recognize the critical role of tax and customs authorities and enhance their capacity and skills to operationalise the tariff concessions, administer the rules of origin and ensure that non-AfCFTA originating goods exploit the preferential treatment vis-à-vis the overlapping rules of the regional economic communities.

“Tax and customs authorities play a key role in the collection of information including beneficial ownership information and financial information, as well as the use of tax identifiers that link individuals to the companies in which they are shareholders.

“As border control, customs authorities are key in detecting and preventing smuggling, counterfeit goods, and overall illicit trade, but in a future single market, one national authority cannot effectively execute this duty on its own.”
He said cooperation between tax authorities, in particular, would be extremely important in preventing tax evasion and avoidance schemes.

He said ATAF, the AfCFTA Secretariat and the AU must establish deeper engagement to protect the future revenues of our anticipated union.

He highlighted information sharing and the use of technology, emphasizing the reshaping of the legal frameworks to enable the sharing of tax information between competent authorities.

This could have multiple advantages including, preventing the duplication of efforts, detection of fraud, tax evasion, or avoidance schemes that make use of multiple jurisdictions, identifying and track the movement of goods.

“Today is an opportunity to begin this engagement between key authorities to map the road towards an operational customs union,” he said.

In a speech read on his behalf, Mr Ken Ofori-Atta, the Finance Minister, said regarding the tax and revenue implications of the AfCFTA, it was likely that customs revenue would not see an upward movement in the short-term.

However, this impact would be marginal compared to the share of intra-African exports as a percentage of total African exports, which is estimated at around 21 percent in 2021.

“In the medium term, AfCFTA is expected to improve trade, and therefore, would impact positively on GDP,” he said.

According to the World Bank, real income gains from the full implementation of the agreement would increase by 7 percent or nearly US$450 billion.

This would increase the domestic income levels of individuals and corporate entities and consequently increase both direct
and indirect domestic taxes.

He said to boost customs revenue mobilization in the short-term, African countries could resort to other revenue-enhancing measures that target domestic taxes.

Mr Logan Wort, Executive Secretary ATAF, said the benefits of AfCFTA were expected to boost industrialization, and economic diversification and ensure sustainable,employment-generating growth for the whole of Africa.

However, this may result in short-term tariff revenue loss to most African member countries where trade taxes remain a key source of revenue.

“Therefore, since tariff revenues are currently a vital revenue source for many African countries, we must critically strategize on innovative ways to bridge these revenue gaps,” he added.

Charters urged to regulate activities of boards of State Enterprises

MSMEs at Sagnarigu sensitised on AfCFTA

Is the Energy Crisis Coming to America? Everything You Need to Know

CBN, Currency Redesign And The Need For Public Awareness

WHO describes maldistribution of medical doctors, other critical health professionals as a crisis