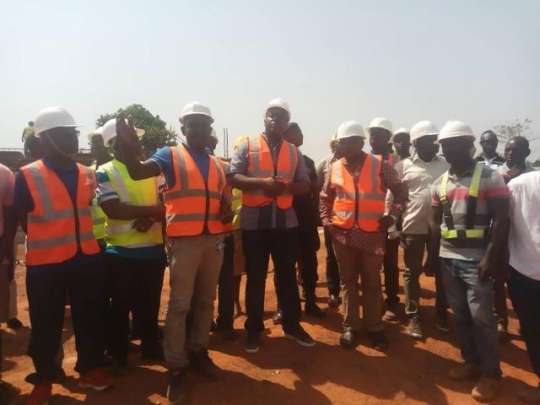 Mr Isaac Kwame Asiamah, the Minister of Youth and Sports, has expressed satisfaction, with the rate of work on the Multipurpose Youth and Sports Centre of Excellence, ongoing at Dormaa Ahenkro in the Brong Ahafo region, despite some few challenges the contractor was facing.

Mr Asiamah said, he was highly impressed, with progress of work on the facility and commended the contractor on site, Mr K.A Dwamena for work done so far.

In the company of Dr. Kwaku Agyemang Manu, Member of Parliament for Dormaa and Minister of Health and some officials of the National Youth Authority (NYA), Mr. Asiamah said, “I am impressed and satisfied with the project, taking into account the complex nature of the site.

“I must commend the contractor for his high sense of innovation; having taken the initiative by adding some facilities like a hostel to befit a modern centre of excellence”.

The member of parliament for Atwima Mponua Constituency said, every site has its challenges and Dormaa was no exception and required massive filling according to the contractor, but he and his team has performed creditably.

“We have made our inputs by way of suggestions; we want him to do a good job.”

Dr. Agyeman Manu, MP for the area also expressed satisfaction with the facility and thanked government for providing a platform for the youth to exhibit their talents.

The Project Manager said, the project was 70% complete and promised to hand it over before the end of this year.

The facility, which was one of the ten centres being built across the country, houses a football field, tartan tracks, volleyball/basketball Courts, ICT/Counselling Centres and a restaurant.

Let’s use Xmas to examine our spiritual life – Reverend