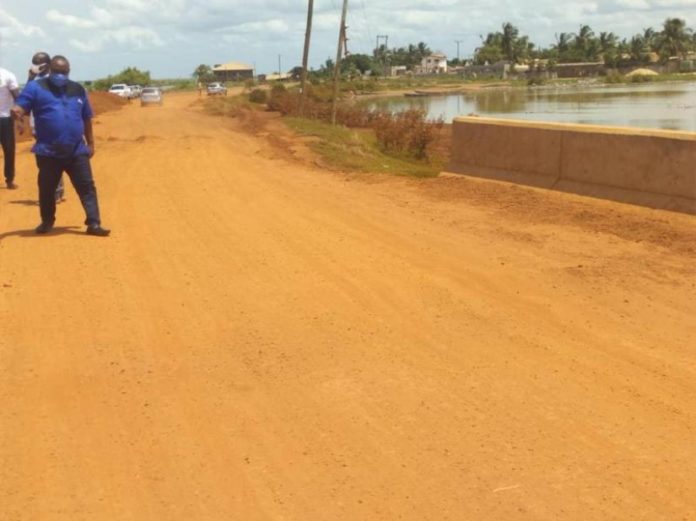 Construction works have resumed on the Havedzi to Anlo-Afiadenyigba Junction road in the Keta Municipality, which had been abandoned for seven years.

The ongoing works saw the fixing of the bridge at Havedzi, giving access to motorists to neighbouring communities.

The eleven-kilometre road, described by the people as a “death trap” due to its deterioration over the years, is reported to have claimed three lives from July 2019 to March this year, with its latest victim being a six-year old girl.

This sparked outrage among the youth who called on the local assembly and government to bring back contractors to fix the road.

Mr Godwin Edudzi Effah, the Keta Municipal Chief Executive (MCE), who toured the construction site on Friday, said the Assembly did its best to get contractors back on the road adding: “We’ll not rest until work is complete.”

“As the contractors have come now, we expect them to construct the road from Havedzi up to Anlo-Afiadenyigba Junction, which is about 11Km and continue from there to Metrikasa, another 15Km. From now till March 2021, we don’t expect them to leave site because enough funding has been secured for the project,” the MCE stated.

Togbe Kpamba III, the Project Manager, explained that work stalled because of financial difficulties and said the construction firm, KAPRA URC Company Limited, had finally secured some funding to continue with the construction with the assurance that work would be completed in a year’s time.

Some road users the Ghana News Agency spoke with expressed excitement about resumption of work on the road, which is the shortest route between Ho, the Regional Capital, and communities in the Keta Municipality as well as other towns in the southern part of the Region.

Mr Gabriel Osei, a motorist, commended the MCE for the efforts, saying fixing the road would not only reduce travelling time but make travelling pleasurable and boost businesses activities.