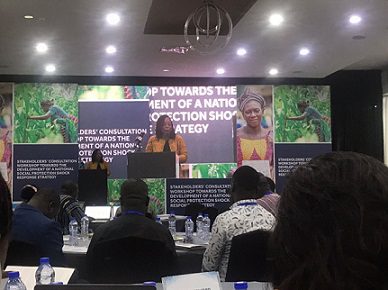 According to Hon. Lariba Zuweira Abudu, the Deputy Minister and Minister Designate for the Ministry of Gender, Children, and Social Protection, Ghana faces significant challenges in reducing multidimensional child poverty by half and achieving the Sustainable Development Goals (SDGs) in less than a decade left.

She said Ghana, just like many other countries had not been spared in the climate change effect as the country is experiencing uncertain rainfalls, droughts, and perennial floods causing human, social and economic losses with severe consequences for household food insecurity.

The available evidence, she said, indicated that flooding in Ghana affects about 0.16% of the Ghanaian population.

In a speech read on her behalf by Mr. Mawutor Ablorh, the Director of Ghana Productive Safetynet Programme, Ministry of Gender, Children and Social Protection, she said, it was important to state that the interaction between poverty and climate change can have mutually reinforcing negative impacts.

The Minister made this known at a Stakeholders’ Consultative Workshop Towards the Development of a National Social Protection Shock Response Strategy held in Accra.

The effects of climate change and the increasing unpredictability of rainfall according to her pose a direct threat to livelihoods, health, food, and nutrition security, heighten vulnerabilities of the poor as well as threatened national security stability.

She added that the outbreak of the COVID-19 pandemic and the impact it had on the poor and the vulnerable Ghanaians cannot be overemphasized, noting that disasters like markets and farm fires including conflicts also negatively affect the vulnerable in Ghana, pushing them further into poverty.

The Minister said though her outfit with support from its partners had done well in establishing social protection systems, there was no doubt that the existing systems are inadequate or robust enough to address the shocks Ghana faces as a country.

Hon. Lariba Zuweira Abudu opined that COVID-19 and other shocks had revealed the need to make Ghana’s social protection systems robust enough to respond to shocks and disasters.

This, she said, can be done either by building shock-responsive systems, plans, and partnerships in advance of a shock to better prepare for emergency response or to support households once the shock had occurred.

She said, “in this way, social protection can complement and support other emergency response interventions.”

Cristabel Dadzie, a Senior Social Protection Analyst at the World Bank, in her delivery appealed to the Government of Ghana to review its pro-poor policy and programme for it to inure to the benefit of the poor and the vulnerable segment of the population.

Since 2020, Developing Partners have been supporting the Ministry of Gender, Children and Social Protection (MoGCSP) to conduct research and engagements towards developing a national social protection shock response strategy and implementation plan.

Several consultations and research including a gender-responsive analysis had been conducted on shock response to inform the process.

As such, the World Bank and UNICEF, in collaboration with the MoGCSP, are organizing a nationwide stakeholder consultation and knowledge-sharing workshop to review, validate and disseminate the findings of studies undertaken and to chart the way for further research and development of the strategy.

The workshop attracted stakeholders on government shock response efforts through presentations from various entities including the MoGCSP and NADMO.

Achieving the sustainable development goals focusing on children: The case of Chance for Children