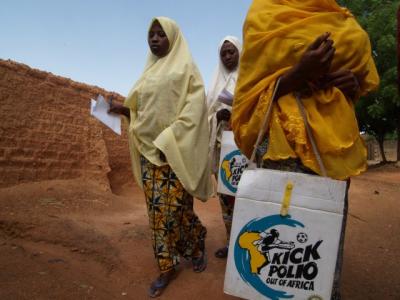 The United Nations International Children Fund (UNICEF), Kaduna field office, has commended the efforts of Zamfara Government in its fight against poliomyelitis.

Alhaji Rabiu Musa, UNICEF Communications Officer, at an occasion to mark this year’s World Polio Day in the state, described the measures put in place by the state government as “remarkable and worthy of emulation by all”.

He said that if the state government maintained the tempo, the issue of poliomyelitis would soon be history in the state.

Hajiya Hajara Janyau, the representative of the state deputy governor’s wife who is also the wife of the state commissioner of health, had earlier said the state had continued to receive various national and international awards following the initiatives it was putting in place to fight the disease.

She also said that the state government had doubled its performances in routine immunisation against the six child-killer diseases through the expansion of the scheme to cover all health facilities in the state.

In his contribution, the representative of WHO, Alhaji Yusuf Argungu, urged parents in the state to continue to present their children for immunisation against the six child-killer diseases.