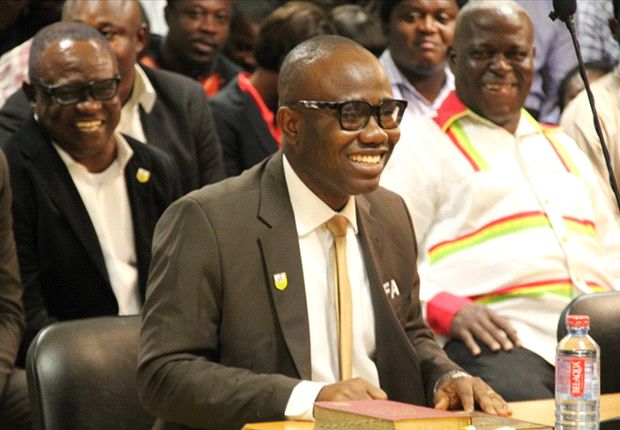 Ghana FA President Kwesi Nyantakyi says some of the findings made by the 2014 World Cup Commission showed clearly they were on a witch-hunting mission.

The three-member Presidential Commission chaired by Appeals Court judge Justice Senyo Dzamefe recommended the further investigation of Nyantakyi for not being able to account for $200,000 handed him by the state to arrange a friendly match for the Black Stars.

Other recommendations were made against some personalities of the Ghana FA ? paramount amongst them being the recommendation for the removal of George Afriyie as the chairman of the Black Stars management committee.

But the GFA boss, who is a lawyer says these findings showed clearly the commission was out to get personalities and not to address issues.

?The serious issues were not addressed in my view?they also made damning observations or findings which are not founded in law or facts,? Nyantakyi told Starr FM.

?There was a finding that Kwesi Nyantakyi should be investigated by the BNI for not accounting for 200,000 dollars that was paid by the state for the organization of a friendly match prior to the World Cup and that was the first time that I heard about that.

?I think that to an extent some of the issues were taken for a joke, we were not looking beyond individuals; Kwesi Nyantakyi was looked at as an individual that must be crucified by all means and so some of the findings were personalized around him rather than the institution of football?and it is very unfortunate?of course if I did something wrong it must be pointed out but when you strenuously and deliberately try to find faults when none exists, it exposes you as a wicked person or someone embarking on a witch-hunting spree.?

Some of the findings made by the commission like the reduction of bonuses paid to Black Stars players and introduction of a quota system in the selection of players were quashed by Government in the issuance of its White Paper.

The commission which had Moses Foh-Amoaning and Kofi Anokye Darko as the other members was set up by President John Mahama to probe into factors leading to Ghana?s disastrous campaign at the 2014 World Cup in Brazil where the Black Stars crashed out from the competition at just the first round stage.

Protect Data: It is the new oil – Ama Poma Boateng