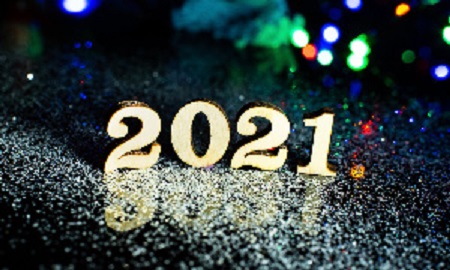 As the world bid adieu to an extraordinary and extremely difficult year largely defined by a once-in-a-century pandemic, world leaders have conveyed hope that 2021 will see positive changes, and urged people to be more prepared for the challenges ahead.

MESSAGES OF HOPE
The year 2021 is “a time for new beginnings and a time to be hopeful,” Philippine President Rodrigo Duterte said Friday in his New Year message.

“The COVID-19 pandemic may have cost us so many lives and material resources, but we also learned so much from it,” he said. “Now, we march on to a new year wiser, stronger and more prepared for the challenges ahead.” U.S.

President-elect Joe Biden, who appeared live from home on Dick Clark’s New Year’s Rockin’ Eve television broadcast, said that he is “more optimistic about America’s chances” than he has ever been.

U.S. COVID-19 cases hit a grim milestone of 20 million on New Year’s Day. The country, which makes up about 4 percent of the world’s population, now accounts for nearly one-quarter of over 83.8 million cases, and 19 percent of 1.8 million deaths reported worldwide, according to a tally from Johns Hopkins University on Friday.

Despite the fact that the threat of the pandemic is still looming large, President Donald Trump described his administration’s accomplishments as “historic victories” in his New Year’s Eve message.

VACCINE AS KEY
Some leaders have highlighted vaccines as a key tool to protect their citizens in the new year. Italian President Sergio Mattarella, in his New Year speech on Thursday, said the vaccine is a crucial factor of “our rebirth.”

“We are now implementing complex strategies, starting with the vaccination plan that has begun across Europe,” he said. Italy kicked off its vaccination campaign on Dec. 27, and plans to vaccinate 10-15 million of its roughly 60 million citizens against COVID-19 by April 2021.

Mattarella said he wanted to be administered the vaccine, after the priority categories receive their shots. He also encouraged Italians to do the same and have faith in their own resources.

Canadian Prime Minister Justin Trudeau said that his country will continue the fight against the virus “with a renewed sense of hope.” “Canadians have already started to receive doses of safe and effective vaccines,” he said, adding that the government will continue to work with relevant parties “to ensure that all Canadians will have access to free vaccines as soon as possible.”

CAUTION MATTERS
While the world has been encouraged by the progress made in developing effective vaccines, some other leaders have also urged citizens to remain cautious and keep up guard.

“We are in the midst of a second wave of coronavirus infections, which may be even worse than the first wave,” said South African President Cyril Ramaphosa in his New Year message delivered on Thursday.

“While we are greatly encouraged by the progress made in developing an effective vaccine, we know that it will be some time before the pandemic ends,” he said, adding “the year ahead will therefore require our greatest effort and resilience.”

In his New Year message on Thursday, Singaporean Prime Minister Lee Hsien Loong urged his citizens to stay cautious and vigilant, and comply with rules and restrictions applied in the nation.

“This is absolutely not the time to relax, and let our guard down, or to hold a big party, imagining that the problem has disappeared,” he said. “Let us keep up our efforts in this final stretch, to cross the finish line together, and complete our mission to defeat COVID-19,” he said.