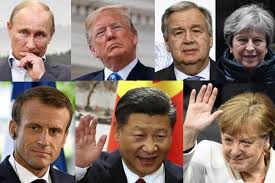 World leaders have urged efforts to champion multilateralism and strengthen international cooperation to tackle global challenges, as this year marks the 75th anniversary of the United Nations’ founding.

Chinese President Xi Jinping on Tuesday called on countries to uphold the multilateral trading regime with the World Trade Organization as the cornerstone.

Countries should pursue open and inclusive development, remain committed to building an open world economy, say no to unilateralism and protectionism, and work to ensure the stable and smooth functioning of global industrial and supply chains, Xi said at the general debate of the 75th session of the UN General Assembly, which was held mainly via video conference this year.

Calling for the removal of barriers to medical cooperation, Russian President Vladimir Putin said “as to healthcare, just like in economy, we now need to remove, as many as possible, obstacles to partner relations.”

“We believe that the UN prestige could strengthen and enhance the role of the humanitarian or human component in multilateral and bilateral relations, namely in people-to-people and youth exchanges, cultural ties, social and educational programs, as well as cooperation in sports, science, technology, environment and health protection,” Putin said Tuesday at the general debate.

“We must together lay the foundations for a fairer, more balanced, more equitable, more sustainable globalization,” French President Emmanuel Macron said Tuesday in his video remarks to the general debate.

Championing multilateralism, Macron said the reconstruction of the foundations of the international order requires the establishment of functional international cooperation based on clear rules, defined and respected by all.

“Multilateralism is not just an act of faith, it is an operational necessity,” Macron said.

Chilean President Sebastian Pinera said Tuesday that the COVID-19 pandemic has underscored the need to strengthen international cooperation and governance, and laid bare the sheer degree of interdependence within the international community, as the virus shows no respect of borders, nationalities or ethnicities.

“Only collaborative and multilateral solutions will allow us to overcome this crisis and to emerge from it with new strength standing on our feet once again,” Pinera said in a statement at the general debate.

“In an interconnected world, it is high time to recognize a simple truth: solidarity is self-interest. If we fail to grasp that fact, everyone loses,” UN Secretary-General Antonio Guterres said Tuesday in his centerpiece address to the 75th session of the UN General Assembly.

Guterres underscored the need for solidarity at this moment, particularly as countries least capable to address COVID-19 have received far too little assistance, and urged the UN’s 193 member states to move forward in humility and unity in the face of the disease.

“We are confronted with a triple challenge: recovering from COVID-19, realizing the SDGs (Sustainable Development Goals) and avoiding the looming climate catastrophe,” said Munir Akram, president of the UN Economic and Social Council.

The response to these challenges must be collective, Akram, who also serves as permanent representative of Pakistan to the UN, said Monday at a high-level meeting to commemorate the UN’s 75th anniversary.

Noting that “unprecedented” level of international cooperation is required, Akram said “such cooperation cannot be promoted anywhere except within the United Nations and its family of organizations.”