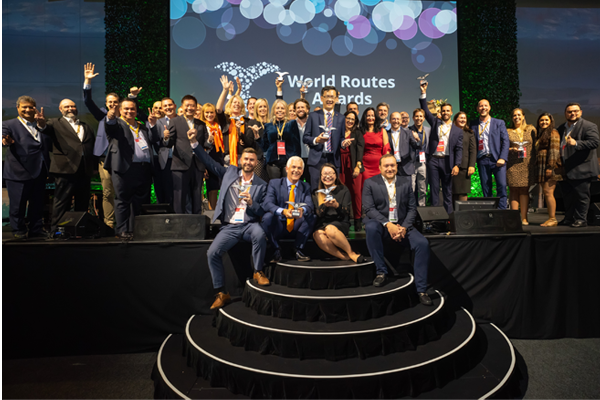 The awards are highly regarded in the aviation industry for recognising marketing services that support new and existing air services, as well as excellence and innovation in the route development community.

Budapest Airport was named the Overall Winner and also won the 4-20 Million Passenger category. The airport’s passenger numbers have increased by double digits over the last four years, with 2018 recording a rise of 13.5 percent to 14.9 million. A total of 34 new routes have been announced or started so far in 2019, including the addition of non-stop service to Shanghai.

Upon being named the Overall Winner of the World Routes Awards, Balázs Bogáts, head of commercial analyses and planning, said “Budapest Airport are delighted to have been chosen as being the “BudapEST” airport in the world for airline marketing. Getting over 34 new routes in just one year shows that we have done a fantastic job and our airline partners have recognised this in the best possible way. I am proud of the BUD team and grateful for our airline partners!”

Billund Airport, which enjoyed a ninth consecutive year of growth in 2018, was named the winner in the Under 4 Million Passenger category. Having invested €6m in incentives to support new routes and capacity increases, the airport saw 20 out of 23 scheduled airlines grow their presence last year.

Brisbane Airport won the 20-50 million passenger category, having secured new services from an impressive seven Asian airlines in the last two years. The airport saw total passenger numbers grow by 1.7 per cent to more than 23.6 million in 2018, with international traveller numbers surging by 4.8 percent to more than six million.

In the Over 50 Million Passenger Category, Singapore Changi Airport was named the winner. The airport’s total passenger traffic hit 65.6 million in 2018, a year-on-year rise of 5.5 percent and up from 37.2 million a decade earlier. In the last 12 months, the airport has added seven new passenger airlines, as well as expanding connectivity to the likes of Urumqi, Nanning and Wuhan in China, plus Busan in South Korea and Kolkata in India among others.

Tourism Ireland won the Destination Category having experienced its best-ever year for tourism to the island of Ireland in terms of visitor numbers, with growth of 5 percent compared with the previous record year.

Last year the organisation worked on 69 marketing campaigns with 22 carriers, ten airport partners and made a combined investment of more than €7m promoting travel to the island of Ireland. This is estimated to have generated €70m of economic benefits.

The Individual Leadership Award was won by Wilco Sweijen. Having worked for Amsterdam Airport Schiphol for more than 30 years, Wilco Sweijen found his true calling in 1998 when he joined the airport’s route development team. Back then Schiphol had 80 airlines and 220 destinations; it now boasts 108 airlines and 326 destinations in 98 countries.

Vueling, a carrier that has enjoyed 10 years of consecutive growth, secured The Airline Award. By following an eight step process, Vueling achieves a 97 percent route development success rate. The airline took delivery of its first Airbus A320neo aircraft in 2018 and this year has launched a number of new routes from Bilbao, Tenerife North and Florence.

The Overcoming Adversity Award was presented to Puerto Rico Tourism Company. Having faced three unprecedented crises between 2016 and 2017, the organisation implemented crises recovery management plan that included restoring core flights and re-establishing international connections. Since then it has worked to further increase air capacity, which has been one of the key facilitators of economic growth on the island since the crises.

The full list of highly commended and winning organisations: