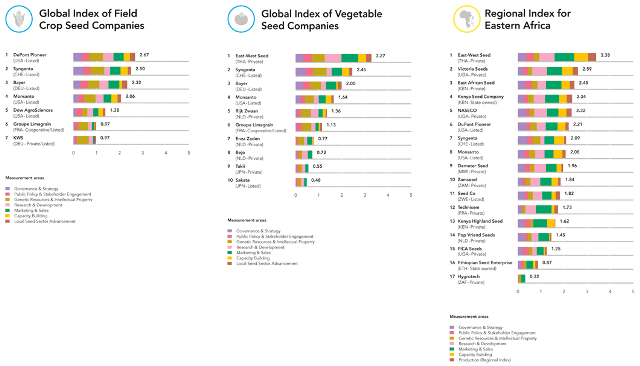 Amsterdam, The Netherlands, 25 February 2016 – DuPont Pioneer and East-West Seed rank highest among leading seed companies in their contribution to achieving global food security, according to the Access to Seeds Index , which was launched today. The Index benchmarks 26 leading seed companies in terms of their contributions to improving smallholder farmer productivity.

The urgency for food security is gravest in parts of the word dominated by smallholder farmers. The seed industry is ideally positioned to boost productivity in such regions, but seed companies have a poor record in reaching such farmers. For example, only 2.5 percent of seeds used by smallholder farmers in sub-Saharan Africa comes from seed companies.

Food security – Zero Hunger – is one of the UN’s Sustainable Development Goals. Each day one billion people go to bed hungry. Alarmingly, the bulk of the world’s population growth is expected to take place in regions that are the world’s most food-insecure: sub-Saharan Africa, South Asia, Southeast Asia and parts of Latin America. To meet increasing demand, food production needs to grow by 70 percent in the coming decades according to UN Food and Agriculture Agency FAO.

Smallholder farming is the prevailing form of agriculture in these regions. Smallholder farms measure approximately one hectare, the equivalent to two soccer fields. Improving the productivity of these farms is essential to meeting future food demands. Seed companies, with their expertise in breeding and delivery, are well positioned to improve smallholders’ access to better seeds. Access to such seeds will help farmers increase yields, improve nutritional quality and deal more effectively with climate change.

The 2016 Access to Seeds Index is the first of a series of biennial reports that evaluate and monitor the seed industry’s performance in bridging the gap with smallholder farmers. The Index focuses on the seven global leaders in field crops (such as maize, rice and wheat), ten global leaders in vegetable seed and zooms in on seventeen leading seed companies in Eastern Africa. The Index, which is published by the Access to Seeds Foundation, an independent, non-profit organization based in Amsterdam, rates each company’s policies and practices to reach the smallholder farmer. The research for the first edition of the Index was provided by Sustainalytics, a leading global provider of environmental, social and governance research, ratings and analytics.

Key findings of the Access to Seeds Index
· Tangible targets often lacking. Although a majority of global seed companies have formulated commitments and strategies focusing on smallholder farmers, tangible targets are often lacking. This limits accountability. Syngenta has set the most ambitious target: reaching 20 million smallholders by 2020.
· A clear gap exists in Western Africa. The global seed industry has become active in Latin America, Eastern Africa, South Asia and Southeast Asia but remains inactive in almost half of the countries in Western Africa.
· DuPont Pioneer leads the ranking of global field crop companies. DuPont Pioneer outperforms its peers with a strong breeding program aimed at developing seed varieties that are suitable for regions with many smallholder farmers.
· East-West Seed leads the ranking for vegetable seed companies as well as the ranking for seed companies in Eastern Africa. The company stands out with a business model that specifically focuses on the needs of smallholder farmers, showing that working for these farmers provides a viable business case in the process.
· Regional companies play a vital role in access to seeds for smallholder farmers. In the Regional Index for Eastern Africa, East-West Seed is followed by a group of companies with strong roots in the region: Victoria Seeds, East African Seed, Kenya Seed Company and NASECO. These findings demonstrate that regional companies play a vital role in providing access to seeds. They do so by addressing issues largely ignored by global peers such as breeding for local crops, addressing needs of women farmers and reaching remote villages.

Executive director Ido Verhagen states: “The Access to Seeds Index offers a unique picture of how the seed industry benefits smallholder farmers. It is encouraging to see that more than half of the global seed companies have taken up this challenge. But more must be done. Most global companies can learn a great deal from their regional peers, who demonstrate valuable best practices for the final mile to the farm gate.”

Verhagen adds: “The Access to Seeds Index enables informed decision-making and dialogue on why, where and how the seed industry can step up its efforts. Improving food security is not limited to the seed industry. Seed companies will have to forge partnerships with other organizations, as DuPont Pioneer is doing in Ethiopia with USAID and the Ethiopian government, building capacity and linking smallholder farmers to the food value chain. Also, local governments have an important role to play in creating the right market conditions.”

“Seed companies play a significant role in addressing challenges such as food security, population growth and climate change, namely by improving the availability, affordability and adaptability of seeds,” said Michael Jantzi, chief executive officer at Sustainalytics. “We applaud the Access to Seeds Foundation for raising awareness of the importance of global food security and look forward to seeing the dialogue progress to affect more positive changes throughout the seed industry.”

How the Index works
The methodology of the Access to Seeds Index is the result of an extensive process of stakeholder engagement and consultations that started in 2012. The following stakeholders were consulted: smallholder farmers, the seed industry, governments, multilateral organizations, NGOs and academics. An Expert Review Committee composed of international experts from various relevant backgrounds reviewed the methodology.

The analysis is based on public disclosed information and data provided by companies on engagement. The Access to Seeds Foundation is pleased with the positive response from the seed industry: as many as 18 of the 26 companies shared their data actively. The Index will be published every two years to monitor progress over time and to encourage the seed industry to step up its efforts. The results will also be used to further refine the methodology.

The primary objective of the Access to Seeds Foundation is to publish, on a regular basis, a set of Indexes that assess and rates leading seed companies on their policies and practices. The primary goal of the Index is to provide an evidence base to the conversation on where and how the seed industry can step up its efforts. The Index is funded by the Dutch government and the Bill & Melinda Gates Foundation.

Overall rankings
The Access to Seeds Index presents three rankings. It assesses the leading global field crop and vegetable seed companies, which are generally at the forefront of research and development. But it also examines the regional industry, initially in Eastern Africa, which plays a crucial role in delivering the industry’s products to the farm gate. It assesses companies across seven different areas. The colors relate to the scores in each area. The sum of scores in all areas produce the overall score. Link to the executive summary

China ramps up efforts to refund VAT credits to enterprises