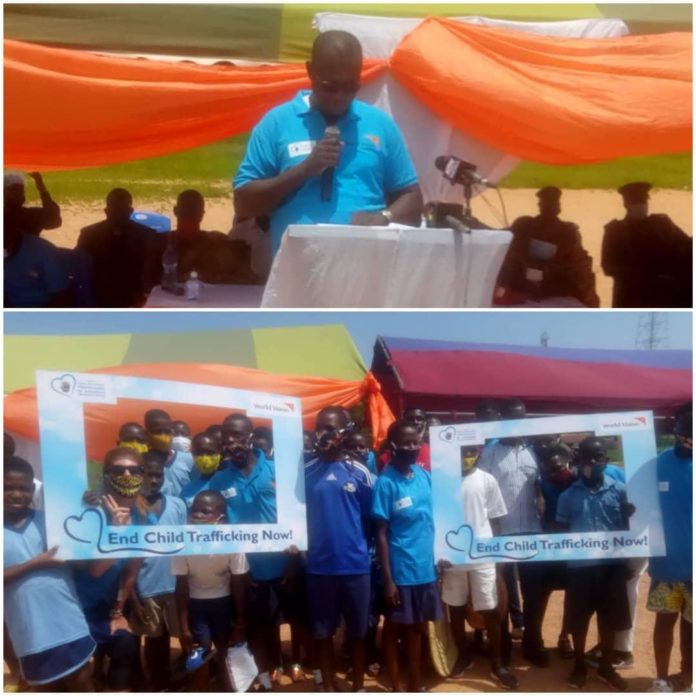 The World Vision Ghana (WVG), a Christian Child-focused and Community-based Organisation, has disclosed that some 484 children suffered from various forms of violence over the last three months.

Mr Dery Gregory, the Child Protection and Advocacy Manager of WVG, said according to its field monitoring report between March and June 2020, on violence against children, gender-based violence against women and girls in WVG operational districts in the country.

The occasion was the World Day Against Human Trafficking in persons at Krachi West District of the Oti Region, which was under the theme, “Committed to the Cause – End Child Trafficking now, COVID -19 is real.”

He said out of the number Krachi East and West accounted for a total of 26 of child trafficking cases, 169 cases of teenage pregnancy and 20 cases of non-maintenance incidences reported to state agencies.

He said close to nine million children have been affected as the government attempted to contain the COVID-19 pandemic.

Mr Gregory said statistics available from World Vision International showed that 65 and 85 million children globally had suffered various forms of violence during the complete and partial lockdowns in 177 countries.

He said WVG would continue to invest in the protection of children through collaborative intervention with government and key actors to collectively minimise the incidence of child trafficking and other violence against children.

He said WVG would ensure children have access to quality education, water and improved sanitation in deprived communities.

“Notwithstanding, the government has what it takes to fulfil the commitment to children,” he said, adding that government should not only be the first to sign onto international treaties, declarations and protocols.

Mr Gregory commended the Regional Coordinating Council and all key actors for working assiduously to bring Ghana’s rating to tier 2 by the United States government on the human trafficking watch list and called for support for agencies involved in fighting the nefarious activities.

He said human trafficking is carried out for exploitation which includes prostitution, sexual exploitation, forced labour, slavery, child marriage and similar practices for the removal of organs (human parts to safe a dying rich person somewhere).

Mr Gregory urged the government to strengthen the capacity of agencies responsible for protecting children and vulnerable people to rescue, arrest and prosecute perpetrators of child trafficking.

ACP Alex Kojo Wowolo, the Divisional Police Commander of Krachi West, said the Police would continue to arrest perpetrators involved in Human Trafficking all over the Region.

He said the Police were going through challenges with the judicial system within the Oti Region, adding that trafficking in persons was a serious crime and a grave violation of fundamental human rights of children.

Mr Wowolo expressed the hope, the establishment of Circuit and High courts would be fast-tracked as the lower or Magistrate courts are limited by status to handle child trafficking cases.

Nana Ofosu Appiah, Twafohene of Kete-Krachi admitted that human trafficking was being practised in some communities in the District with impunity and pledged the support of traditional authorities to stop the practice.

He said human trafficking was a dehumanizing practice, which should be condemned and the perpetrators punished severely and appealed for continuous support for the antihuman trafficking task force to rescue victims.

Nana Appiah assured World Vision Ghana that the Krachi Traditional Council and Civil society were committed to working with the frontline workers of State and private institutions to end human trafficking in the District and Ghana at large.