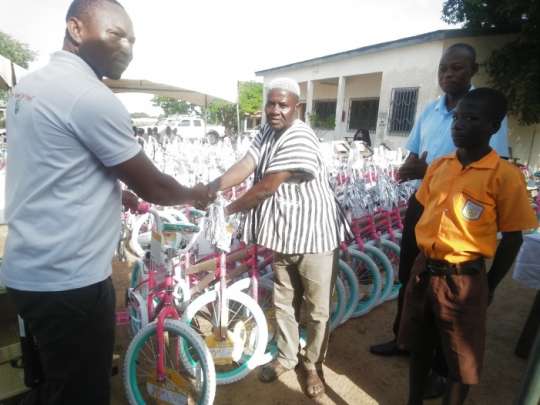 World Vision International-Ghana, (WVI-G) has donated 300 Bicycles and 38 Tricycles at a cost of 16,920 US dollars to school children in the Bawku West, Garu and the Tempane Districts of the Upper East Region, to aid them attend school.

About 300 abled children from the Junior High and primary schools who travel long distances to attend school received the bicycles, while 38 school children with disabilities were presented with wooden tricycles.

The NGO also presented ten wooden wheel chairs to the Bawku West District Health Directorate to aid in providing maternity services to pregnant women in the various health facilities in the area.

Mr Timothy Amang-Bey Akanpabadai, the Sector Manager at World Vision for the Northern, Upper East and West Regions who presented the bicycles to the beneficiaries at Zebilla in the Bawku West District said the move was aimed at improving accessibility to schools, for children in all state of life, to enable them attain quality education.

Mr Akanpabadai said WVI-G was focused on empowering children to improve on their livelihood conditions so that they could grow to become responsible adults to help in the development of their communities and the region at large.

He said as part of efforts to provide quality livelihood for the people, the WVI-G since its inception in 2007 in the Bawku West District, undertook many development oriented programmes including; the WASH project, Child Health, and the construction of mechanised boreholes to provide easy access to potable drinking water, to help reduce poverty in the area.

Mr Akanpabadai said the NGO was working to protect and improve the development of children and called on parents and the society to help it in the fight against child marriage, saying the interest of the girl-child was paramount.

He said the Bawku West Area Programme, supported by World Vision- Korea, was operating in about 46 communities, with a target to reach 20,040 people in its second phase.

Mr Akanpabadai explained that, the programme was collaborating with the District Assembly and its decentralised departments and Community Based Organizations (CBO), local nongovernmental organizations and Faith Based Organizations in implementing a Community Engagement and Sponsorship Plans, WASH project and a Household Food Security Project as well as cross cutting themes such as Christian commitment, gender advocacy child rights and protection.

Ms Nimatu Issifu, a pupil living with disability, at the Sapeliga primary school and Master Ayeebo Lamisi, an able student at the Gbantongo Junior High School commended the WVI-G for its timely intervention in providing them with the means to go to school early.

Miss Issifu who received a wooden tricycle could not hide her joy, saying she could go to school on her own and not depend on her mother who used to carry her.