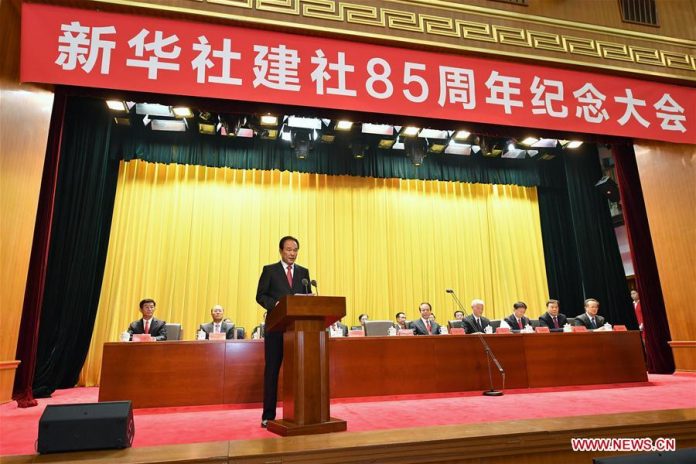 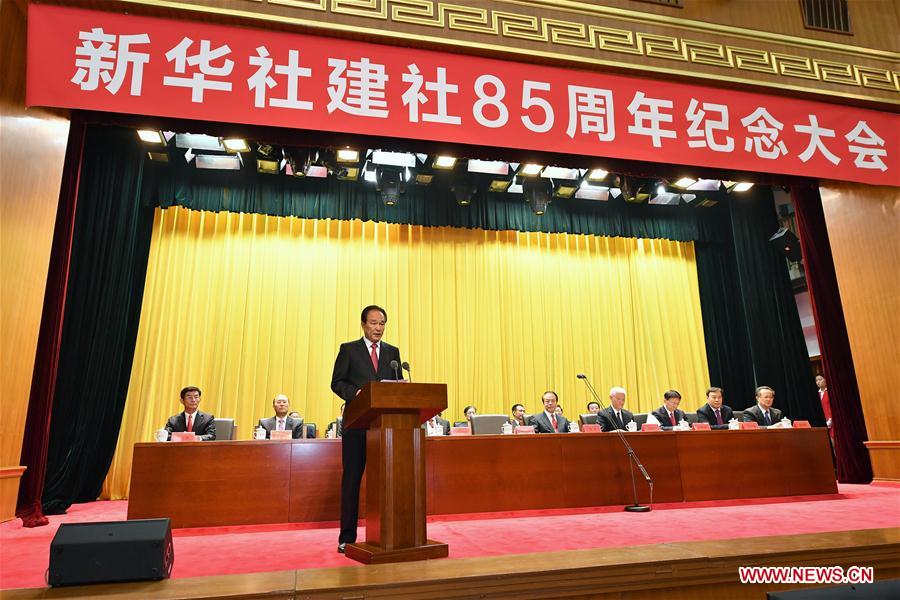 Chinese President Xi Jinping on Saturday sent a letter congratulating Xinhua News Agency on the 85th anniversary of its founding.

In his letter, Xi, who is also general secretary of the Communist Party of China (CPC) Central Committee, said that Xinhua, a news organization set up and led by the CPC, plays a preeminent role in the Party’s media work.

Over the past 85 years, Xinhua has headed towards the direction guided by the CPC, followed the Party’s principles and stuck to the principle of “being run by statesman,” Xi said.

Xinhua has “breathed the same air as the people, and made progress with the times at the same pace,” he said.

It has worked to disseminate the Party’s propositions and spoken for the people, making important contributions to the Party’s undertaking in uniting and leading Chinese people of all ethnic groups towards the great victories of the country’s revolution, its development and reform, Xi said.

Xi called on Xinhua to stay true to its initial mission and forge ahead, unswervingly following the Party under the current situation, firmly keeping in mind the correct political direction, and effectively guide public opinion.

He urged Xinhua to pass on its revolutionary-period legacy and carry forward its fine traditions while seeking reforms and innovation as well as integrated development.

It should also expand external exchanges and speed up building itself into a new type of first-class global news agency in a bid to better serve the overall work of the Party and the state, as well as the general public, and live up to the great trust of the Party and the people, Xi said.

Xi’s letter was read at a ceremony marking Xinhua’s anniversary held on Saturday morning, which was attended by Xinhua President Cai Mingzhao as well as representatives of Xinhua staff.

In his speech, Cai said that Xinhua has become the backbone of the Party’s media work. He went on to accentuate the “Xinhua spirit” of being loyal to the Party, being attentive to the people, seeking truth from facts, and being pioneering and innovative.

Members of Xinhua must unite more closely around the CPC Central Committee with Comrade Xi Jinping as the core, and inherit and carry forward the fine traditions passed on from their predecessors, he said.

They will work hard together so that the agency’s news reporting chimes with the CPC Central Committee’s governance practices, building Xinhua into a new type of first-class global news agency, and make new and greater contributions to China’s two centennial goals and the great rejuvenation of the Chinese nation, Cai said.

Xinhua News Agency started on Nov. 7, 1931 as the Red China News Agency in Ruijin in southeast China. The agency changed to its current name in January 1937 in Yan’an in northwest China.

After the founding of the People’s Republic of China in 1949, Xinhua became the state news agency.

Moderna vaccine rolled out in England as country hits target