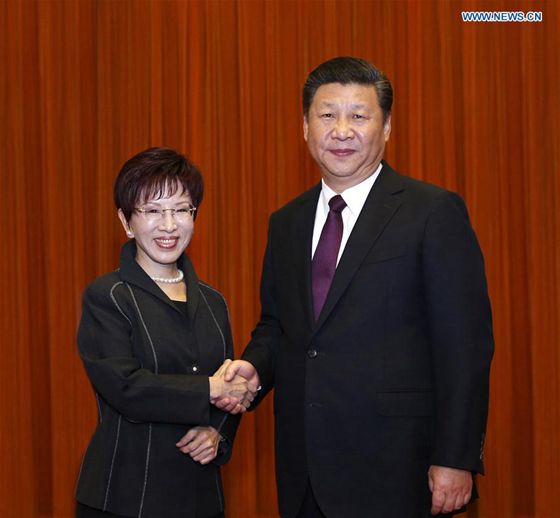 Xi Jinping, general secretary of the Communist Party of China (CPC) Central Committee, on Tuesday underscored the importance of adherence to the 1992 Consensus and called for maintaining the peaceful development of cross-Strait relations. Xi Jinping (R), general secretary of the Communist Party of China Central Committee, meets with a delegation led by Hung Hsiu-chu, leader of Taiwan’s Kuomintang (KMT) Party, at the Great Hall of the People in Beijing, capital of China, Nov. 1, 2016. [Photo/Xinhua]

Xi made the remarks while meeting with a delegation led by Hung Hsiu-chu, leader of the Kuomintang (KMT) party in Taiwan.

“To ensure national integrity and protect the fundamental interests of the Chinese nation is the common will of all Chinese people,” Xi said.

Xi made a six-point proposal on cross-Strait relations.

Xi said that hostility across the Taiwan Strait should end, and a peace agreement be reached through talks based on the one-China principle.

The CPC and KMT, the mainland and Taiwan, still have some complicated political disagreements, which will have to be eventually solved in a phased manner, Xi said, adding that with resolve and sincerity, solutions would be found.

“We have always advocated talks, on the basis of the one-China principle, to put an end to hostility across the Strait and reach a peace agreement,” Xi said, suggesting the CPC and the Kuomintang have discussions in this regard..

Xi said that the one-China principle is at the core of the 1992 Consensus, which affirms that both sides of the Strait belong to one and the same China.

“Changes in Taiwan’s political landscape cannot change the historical underlying facts or the core connotation of the 1992 Consensus,” he said.

“Whether the 1992 Consensus is acknowledged or not raises the essential question of whether the mainland and Taiwan belong to one country or two.

“When it comes to this cardinal issue of right or wrong, not the slightest obscurity or wavering is allowed in our stand.”

“Safeguarding national sovereignty and territorial integrity is the core national interest, and it is a line that cannot be crossed,” Xi said.

The idea of “Taiwan independence” compromises national sovereignty and territorial integrity, incites antagonism between the two sides, and poses the greatest challenge to cross-Strait peace and stability, according to Xi.

“It will bring nothing but serious disasters to compatriots in Taiwan,” he said.

All Chinese people will resolutely oppose separatist activities implemented by any political parties or individuals at any time, Xi stressed. “We have the will, confidence and ability needed to contain ‘Taiwan independence.'”

Xi proposed better communication and cooperation between the CPC and KMT, saying the two parties should jointly shoulder the responsibilities of opposing “Taiwan independence,” and safeguarding cross-Strait peace and stability.

Pang Jianguo, a professor with Chinese Culture University in Taiwan, said the mainland has ample confidence to take the initiative in cross-Strait relations given its preeminence in economic and social development.

Pang said Taiwan’s ruling party should be aware that there will be no way out if it does not recognize the 1992 Consensus.

Xi urged the two parties to serve as channels of communication to improve cross-Strait trade ties and industrial cooperation, as well as support the cooperation between mainland and Taiwan enterprises in innovation, brand development and market expansion.

He also called for greater cooperation in agriculture and fisheries, and on small and medium-sized enterprises.

Promoting the integrated social and economic development of cross-Strait societies, which is based on mutual benefit, serves the interests of people on both sides, Xi said.

He called for creating a better environment for the education and growth of the younger generation on both sides, encouraging them to engage in early contacts and frequent exchanges, which will help them feel kinship with each other.

The mainland will share its development opportunities with Taiwan, Xi said, promising that policies and measures will be rolled out to better help people from Taiwan to study, work, start businesses and live on the mainland.

Xi also called on both sides of the Taiwan Strait to carry forward Chinese culture.

Both the CPC and KMT should advance cross-Strait cultural exchanges to carry forward the fine traditions of Chinese culture, interpret the zeitgeist in Chinese culture, strengthen spiritual bonds and heart-felt connection between compatriots on both sides, and boost confidence in Chinese culture as well as the Chinese nation, Xi said.

He called for boosting the well-being of people across the Taiwan Strait.

The more complicated cross-Strait relations get, the more imperative it is for both the CPC and KMT to seek welfare for the people, Xi said. He called for the needs of compatriots on both sides to be addressed, especially ordinary people in local communities, and the mobilizing of more people to join cross-Strait exchanges.

“We will, as always, address the actual needs and seek benefits for Taiwan compatriots,” Xi said.

The CPC and KMT should make utmost efforts to pursue causes that will boost the blood connection of compatriots on both sides, improve their welfare, promote peaceful development of cross-Strait relations, as well as uphold interests of the entire Chinese nation, Xi said.

Xi called for dedication in realizing the great rejuvenation of the Chinese nation with concerted efforts.

Although there were sometimes feuds between the CPC and KMT in history, they cooperated with each other at critical stages for the overall interests of the nation, Xi said, adding that the cooperation played an important role in ethnic and national development.

The CPC and KMT, together with people from both sides, embarked on a path of peaceful development of cross-Strait relations since 2008 that has brought practical welfare to compatriots on both sides, he said.

Hung said KMT and the CPC should continue promoting economic, trade and people-to-people exchanges on the basis of adhering to the 1992 Consensus and opposing “Taiwan independence.”

She said the KMT will actively discuss and push for the “institutionalisation” of cross-Strait peace, jointly maintain the peaceful development of cross-Strait ties and bring more wellbeing to the compatriots.

“The meeting between Xi and Hung is pragmatic and has far-reaching significance,” said Wang Kunyi, a professor with Tamkang University in Taiwan.

Wang added that Xi’s six-point proposal expressed the goodwill to the Taiwanese people and echoed Hung’s idea, which both oppose “Taiwan independence” and are committed to promoting peaceful cross-Strait relations.