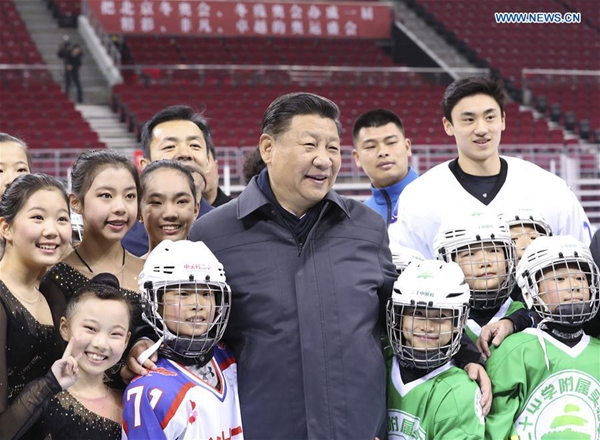 President Xi Jinping has stressed that the city planning and construction in Beijing, and preparation for the Beijing 2022 Winter Olympic Games, are two important missions for the city in the present and near future.

Xi, also general secretary of the Communist Party of China Central Committee and chairman of the Central Military Commission, made the remarks during an inspection tour in Beijing Thursday and Friday.

During the two-day inspection, Xi visited the site for Beijing’s new international airport, Wukesong sports center, the Capital Gymnasium, the office of the capital’s “subsidiary administrative center” and a forest park.

While inspecting the construction site of Beijing’s new international airport terminal building, Xi said the new airport was a major landmark project of the capital, which should adopt the highest standards, best quality and the world’s most advanced management technology and experience.

At the Wukesong sports center, venue for the 2022 Winter Olympics ice hockey event, Xi urged efforts to learn from foreign experience while strengthening domestic development and technological innovation in terms of stadium planning, design and construction.

He also called for high standards in the planning, construction and management of the capital’s “subsidiary administrative center,” and stressed work safety at the construction site.

On Friday afternoon, Xi presided over a symposium on city planning and construction in Beijing and preparation for the Beijing 2022 Winter Olympic Games, and heard reports delivered by Beijing Party chief Guo Jinlong and Gou Zhongwen, head of China’s General Administration of Sport.

While addressing the symposium, the president called for continued efforts to make Beijing a world-class metropolis.

“The planners should improve public services, control population and formulate the city lay-out in accordance with the core functions of the capital with a unified plan,” Xi said.

Xi stressed that removing Beijing’s non-capital functions was the key to the planning and construction of the city, and Beijing should take advantage of technology and human resources to upgrade its development.

“Limits in population, ecological protection and urban development should be made based on the capacity of the environment,” Xi noted.

Xi also called for comprehensive measures to address prominent problems such as air pollution, traffic congestion and soaring house prices, as well as better protection of the history and culture of Beijing.

Xi said that the preparation work for Beijing Winter Olympic Games should embody the spirit of green, open and shared development, along with fairness and honesty. He vowed zero tolerance on doping and corruption, saying: “We should make the winter Olympic games as pure and clean as snow and ice”.

He called for good use of the socialist system during preparations, while also stressing the importance of the market.

Xi said that construction projects should not be extravagant, with their follow-up use taken into consideration.

He also highlighted early planning to improve the country’s competitiveness in winter sports.

“We should on one hand expand the public population participating in winter sports, while on the other hand focus on improving our technical and tactical levels and developing our own advantageous events,” Xi said.

He stressed cultivating the talent of both athletes and coaches. Xi also encouraged the Beijing Winter Olympic organizing committee to actively use modern technology, especially informatization and big data, to improve operation and efficiency.

Doctoral students advised to be proactive in preparation of research proposals for scholarships.