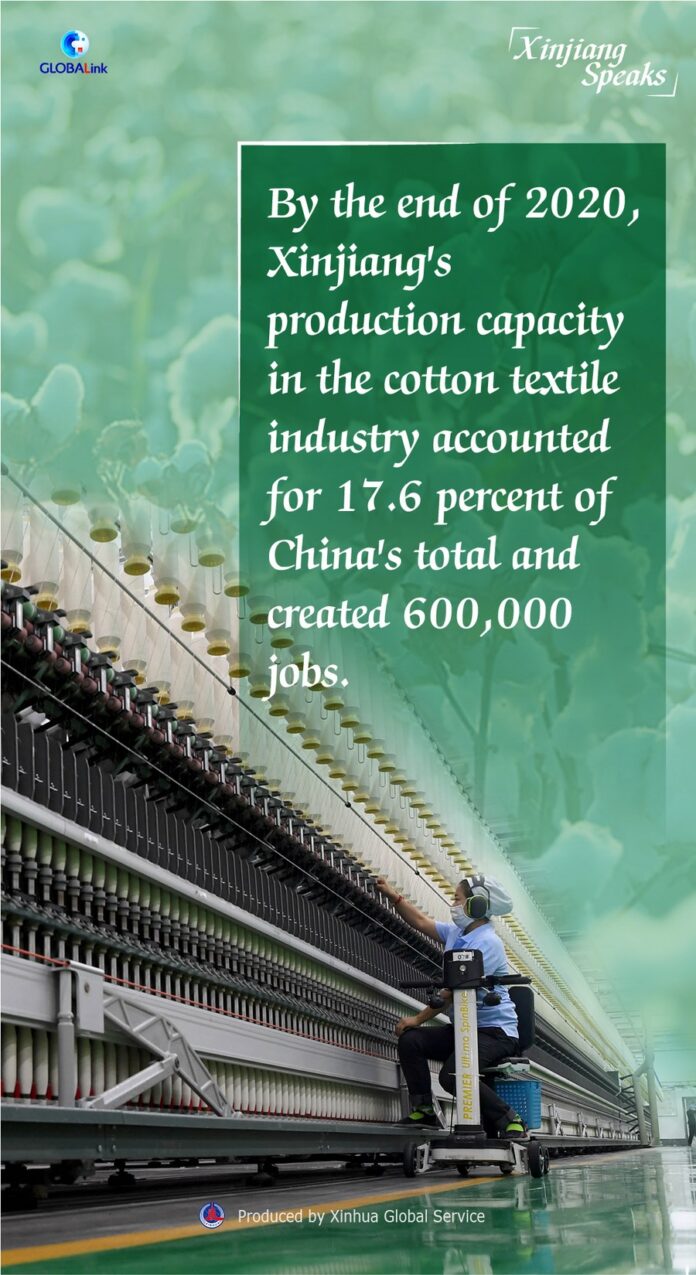 Akbar Turek, a maintenance team manager, has been working in a major spinning company in Asku, southern Xinjiang for eight years.

Last year, he encountered something troubling — the company he works for, which is the largest local provider of jobs, was blacklisted by the United States due to accusations of “forced labor.”

As a result, some contracts could not be fulfilled. Akbar Turek, who loves his job, believes his own experience can debunk such groundless accusations as he does not want the company and his own livelihood to be impacted.

“In 2013, my cousin got me a job here because he said the working environment is good and the salary is high, and with free room and board. I have worked here for eight years already, and my cousin is in his 10th year,” said Akbar Turek, a Uygur from Wensu County, Aksu Prefecture.

“There is no such thing as ‘forced labor,’ and I work here to secure a better life,” he said. “Can those who fabricate these rumors feed my wife and children if I lose my job?”

The company, Huafu Color Spinning, has nearly 6,000 workers, of which more than 90 percent are from ethnic minority groups.

“Our company treats the employees very well. Many employees advise their relatives and friends to work here,” said Li Qiang, board chairman of Huafu Color Spinning.

“Our factory has created jobs for the local people. They have come to work here out of their own will, not forced by anyone,” he said. “The sanctions hurt not only us, but also our clients overseas as well. It’s a loss for both sides.”

The cotton textile industry is one of the pillar industries in the region. Nearly half of the local farmers are engaged in cotton production, and the income from cotton makes up 30 percent of their total earnings.

The company, based in the county of Xayar, is expected to raise its output value to more than 500 million yuan (about 78.6 million U.S. dollars) this year from 80 million yuan in 2018 when it was established.

“The demand for our cotton-picking machines has exceeded the supply this year,” Qiu said, adding the company equips the machines with a positioning system to provide on-site maintenance services.

Now the company has developed a series of products, including plowing machines, seeders and pesticide sprayers, to meet the increasing demands of local farmers.

Omar Ezez, a 32-year-old cotton farmer in the county, has witnessed a huge change in cotton production. With the help of a cotton picker, his family’s cotton field covering over 20 hectares is harvested in just two days. By contrast, when he was a child, it took about three months for a dozen workers to complete the picking work on a field covering roughly 7 hectares.

He bought a cotton picker last year and got a license to drive it this year. After picking the cotton on his own farm, he also drives the machine to work for other farmers, from which he expects to earn up to 500,000 yuan this year.

“Money is rolling in as long as the machine keeps running,” he said.

Machines now perform over 80 percent of the cotton-picking work in the region, with the harvesting in northern Xinjiang nearly entirely mechanized, according to the regional agricultural authority.

“During the eight years I have worked here, I have got married and my child is three years old, and goes to the kindergarten near the factory,” said Akbar Turek. “I just bought a house in the community next to the factory earlier this year and will move in next year.”

Indescipline Among Motorbike Riders Major Cause Of Road Accidents – SSO