The Yapei Bridge, which crosses over the White Volta in the Northern Region, has been partially closed down for routine maintenance to be carried out on it to keep it in good shape. 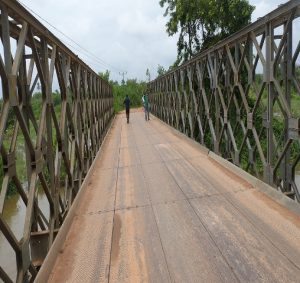 The bridge will remain partially closed for 30 days beginning from today (May 03, 2017), and motorists will be allowed to cross it (bridge) from 6:00am to 6:00pm during the period of maintenance.

The Yapei Bride, constructed in the 1960S, has suffered a lot of distress resulting in weak metal joints and broken slaps requiring maintenance.

Mr Kwasi Amoako-Atta, Minister of Roads and Highways, who inspected ongoing maintenance works on the bridge at Yapei, appealed to motorists to cooperate with engineers to complete work on schedule to keep the bridge in good shape for use.

The Yapei Bridge facilitates movement of goods and people to and from the northern parts of the country, and it is also located on the international transit corridor, which serves the country and her landlocked neighbours.

Mr Amoako-Atta said efforts were being made by the government to secure funding to replace both Yapei and Buipe bridges as a long-term solution as well as construct the Daboya Bridge to serve as an alternative link in the Region.

He said the Ministry was undertaking a holistic overview of all bridges in the country to keep them in good shape.

Engineer Aminu Abubakar, Project Manager at the Bridge Maintenance Unit of the Ministry of Roads and Highways, said 13 out of 19 joints on the bridge would be rehabilitated.

Mr Salifu Saeed, Northern Regional Minister, who accompanied the Roads and Highways Minister, was happy that the maintenance was being carried out to amongst others avoid any eventualities.