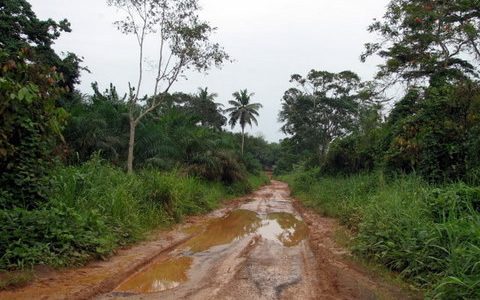 Five communities forming the Yawkoko cluster of villages, have appealed to the Ayensuano District Assembly to help repair the bad road the road in the area. A former Assembly Member, Mr. Patrick Ofori, who made the appeal through the Ghana News Agency (GNA) at Yawkoko in the Eastern Region, asked the Department of Feeder Roads to reshape the bad portions of the roads in the area to avert accidents.
He described the Yawkoko ? Junction feeder road as ?the most dangerous portion and a death trap? in the area, adding that, travelling on the road, especially at night was horrifying, because of the undulating rocky nature.
Mr. Ofori pointed out that the old Yawkoko ? Teacher Mante stretch of the weedy narrow lane, turned-foot-path was posing danger to lives as vehicles often veered-off their lane to the wrong side.
According to him, the Junction ? Yawkoko ? Teacher Mante road formed part of the old Suhum ? Nsawam highway, and that with the construction of the new Accra ? Kumasi highway, the old road had been neglected.
Mr. Ofori noted that if the old road was reshaped, it could be used as a detour each time there was a blockade on the new highway and would also help facilitate the transportation and carting of passengers and foodstuff respectively from these communities to the urban centres.
Mr. Ofori, who is also the chairman of the School Management Committee (SMC) of the Presbyterian School at Yawkoko, stated that during the rainy season, the road became slippery making it dangerous to ply.

He said drivers have therefore threatened to stop plying the route, which would not auger well for the communities.
He said there was the tendency that foodstuff could go waste, if nothing was done, and therefore, made a passionate appeal to the Department of Feeder Roads to repair the Yawkoko road to avert accidents.