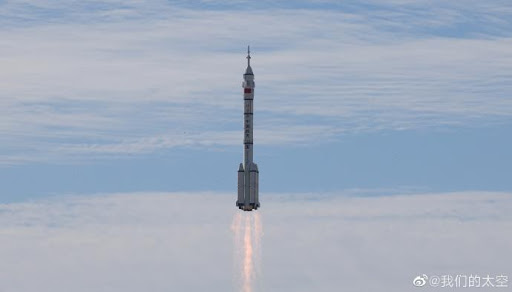 Tommy Yang – As both state-funded space programs and private space travel projects sponsored by billionaires made significant progress in 2021 by launching a number of crewed missions successfully, industry experts warned that space tourism could lead to enormous waste of money and resources.

Richard Branson, Jeff Bezos and Elon Musk have all started successful businesses that made them billions of dollars. These three billionaires share something else in common: they all love space travel and wouldn’t mind spending a fortune on it.

Space travel programs funded by the three billionaires have enjoyed a breakthrough year in 2021.

Branson, who founded the Virgin Group in the 1970s, flew as a passenger onboard the Virgin Galactic Unity 22 to the edge of space on July 11, marking the first crewed flight into space under a program fully funded by a private company.

Amazon founder Bezos followed suit shortly afterwards on July 20, when the Blue Origin NS-16 took four crew members, who were all space tourists like him, into the suborbital space.

Thanks to the flourish of space travel programs offered by private companies funded by these billionaires, the dream of becoming an astronaut would no longer be reserved to those “lucky ones” chosen under the government-funded space exploration programs.

However, such trips are only possible if the passengers are rich enough to afford the astronomical price tag of the ticket for such space flights.

According to media reports, Oliver Daemen, the Dutch teenager sponsored by his father, an investment tycoon, spent $28 million to get a seat on the first crewed flight of Bezos’ Blue Origin. A trip to the edge of space offered by Branson’s Virgin Galactic appeared to be more affordable in comparison, costing about $450,000 per ticket.

At the same time, three passengers are reportedly paying $55 million per person for a trip to the International Space Station (ISS) riding a rocket from Musk’s SpaceX next year.

Unlike the national pride driven space competition between the United States and the Soviet Union during the Cold War, traveling into space is no longer only about proving a nation’s pedigree through scientific discovery. Space travel could just be for fun.

However, industry experts warned that such space flights for leisure could be excessively wasteful.

“With the coming online of the space enterprises of Jeff Bezos, Elon Musk and Richard Branson, anyone with cash to burn now has an increased number of options to get into space. I think that this is a tremendous waste of money and resources (remember that launches are incredibly polluting!), which could be better used for support of broader goals that benefit humanity somehow,” Professor Richard de Grijs from the Department of Physics and Astronomy under the Macquarie University in Sydney, Australia told Sputnik.

While space tourism offerings from private companies proved to be successful for the first time in 2021, private passengers had experienced space travel offered by government-funded programs before, the expert pointed out.

A number of private passengers flew in Russia’s Soyuz spacecraft to enjoy adventures onboard the ISS from 2001 to 2009.

In addition to transporting tourists, the Soyuz spacecraft also took a Russian film crew to the ISS this year.

Similar to the purpose of US and Russians space programs during the Cold War, China’s space program has become one of the top priorities of the Chinese government that aims to project its carefully curated rising great power image among its citizens.

After being excluded from participating in the ISS, China decided to build its own space station.

Following the successfully launch of the Tianhe core module its Tiangong space station in April, China completely a number of subsequent missions that brought resupply cargo and three crew members to the new space station from May to October.

Although China’s space station and its space technology may not be the most advanced in the world, Professor de Grijs argued that the Chinese program showed encouraging results.

“Remember that China has been excluded from participation in the ISS, predominantly because of the Wolf amendment which prohibits federal funding in the US to be used for collaboration with Chinese state-sponsored program. As such, the Chinese are constructing their own space station, which includes a modest research element and which is a likely step in their quest to expand their human spaceflight beyond low Earth orbit. Meanwhile, they are also gradually building up a track record in planetary exploration in the nearby solar system (including to Mars, for instance), with each subsequent mission going one or more steps beyond the previous mission. Again, this is to prove technology readiness and to avoid catastrophic failures along the way. The Chinese are thus gradually building up expertise and their initial scientific results are encouraging,” he said.

The expert explained that China was not unique in trying to boost national pride through its space programs.

“It is, of course, fully understandable that nations are proud of their achievements in space, particularly if it’s the first time they achieved something. That is not unique to the Chinese space program; the same applied to the US and Russia during the early years of the space race, and it similarly applies today to emerging space nations like India, the UAE [United Arab Emirates], etc. National pride doesn’t appear to play a major role in ESA [European Space Agency] missions though, probably because ESA is an international organization representing a large number of governments,” he said.

The expert added that political hurdles would often stand in the way of international collaboration in space exploration.

“Yes, I am all in favor of international collaboration as that would allow us all to make the most efficient use of resources — be that materials, technology expertise, launch vehicles, fossil fuels, human ingenuity, qualified personnel, etc. Unfortunately, political considerations often stand in the way of international collaborative scientific and technology progress, while entanglement of civil and military interests also hampers the building of trust among nations governed by very different types of governments,” he said.

On top of the flights to space stations orbiting the earth, a number of missions to explore the outer space, as far as the Mars, also became successful in 2021.

Perseverance, the latest American Mars rover, successfully landed on Feb 18. And China’s Zhurong rover joined its American peer on the red planet about three months later on May 14.

At the same time, the United States, Russia and China have all announced future programs aiming to explore the Moon further.

Building space stations and further exploration of other planets are both very important and different space programs need to strike a fine balance between them, Professor de Grijs pointed out.

“I think that there is a balance to be struck. Human spaceflight to the ISS and eventually the Moon may bring significant benefits to developments back on Earth in fields like chemistry, biomedicine, physics, etc., and eventually perhaps even in terms of mining of resources on the Moon. Unmanned missions further afield into the solar system will undoubtedly yield scientifically interesting insights into the formation of the solar system, planetary atmospheres (and things like runaway greenhouse effects), the impact of solar events (eruptions, coronal mass ejections, the solar wind, etc.) on the Sun-Earth system (that’s also known as ‘space weather’), etc. Both aspects (human spaceflight in low Earth orbit, and perhaps to the Moon, and unmanned planetary exploration missions) are important — for humanity and for science — so a careful balance must be struck. That won’t be easy given the numerous funding pressures governments are under,” he said.

As more and more private companies funded by billionaires joining the foray in space exploration, the new private capital into space programs could present challenges to government-sponsored programs in securing additional funding, the expert warned.

“I think that there are two sides to the coin here. On the one hand, private companies are increasingly asked to step into government-supported space endeavors. For instance, SpaceX is now routinely providing launches for NASA to service the International Space Station. They can run their businesses much more cheaply than government behemoths like NASA. On the other hand, by continuing to rely on private enterprises, government funding for further space missions may be curtailed. I have not come across any arrangements where governments “match” private funds (but my information may not be fully up to date), so I think the idea that competition by private companies may lead to increased government funding is a bit of a pipe dream,” he said.

Nevertheless, thanks to the deep pockets of the billionaires, a number of space flights operated by the private companies are likely to bring new excitement to space enthusiasts in 2022.