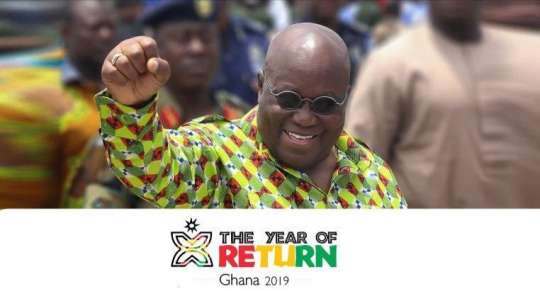 “On behalf of Government, I extend sincere, heartfelt gratitude to the people of Ghana for helping to make the ‘Year of Return’ a great success,” he said in a statement.

“The welcoming attitude and the warm Ghanaian hospitality proved to be the strongest attraction to hundreds of thousands of our kith and kin from the African Diaspora, who thronged our shores to commemorate the ‘Year of Return’. The proverbial Ghanaian hospitality won once more.”

President Akufo-Addo, in September 2018, proclaimed 2019 as the “Year of Return” at the Washington Press Club, in Washington D.C., as a major landmark spiritual and birth-right journey inviting the Global African family, home and abroad, to mark 400 years of the arrival in 1619 of the first 20 enslaved Africans in Jamestown, Virginia.

“The Year of Return Charter celebrated the cumulative resilience of all the victims of the Trans-Atlantic Slave Trade who were scattered and displaced through the world in North America, South America, the Caribbean, Europe and Asia.

The initiative aimed to position Ghana as a key travel destination for African Americans and the African Diaspora, and also as a medium to engage all persons of African descent more positively in areas such as trade and investment cooperation and skills and knowledge development.

President Akufo-Addo said: “The ‘Year of Return’ proved exciting and afforded us the chance to re-establish, intensify and solidify the relations between those of us on the Continent and those in the Diaspora.”

“They felt very welcomed, enjoyed their stay with us, and, as a result, our country is, once again, the toast not only of Africa but also of the world,” he said.

The President further saluted the heads, officers and men of the security services for their sense of professionalism and dedication to duty, which enabled them to preserve the peace and security of the country in the course of the celebration. “By the grace of God, no untoward incident occurred.”

“As we begin the new initiative of “Beyond the Return,” which will entail that we engage in mutually beneficial trade, investment and cultural cooperation with the African Diaspora, I urge all Ghanaians to demonstrate this same level of excitement and commitment that characterised the Year of Return and help make it also an enduring success.”

“Together, I am confident that we can imbibe in ourselves a deep consciousness and understanding of the goals and history of the African peoples to ensure that the 21st century is, indeed, the African century, the century of black people the world over,” the President said.

The Year of Return attracted more than 200,000 people from the African Diaspora and estimated to have generated over 1.5 billion dollars through related activities into Ghana’s economy in 2019.

The campaign was well received by the Diaspora as President Akufo-Addo personally travelled to the Americas and the Caribbean to promote the programme.

The year-long initiative culminated in a series of activities, including a music festival, an investment conference targeting diaspora Ghanaians, and the Right to Return Initiative, encouraging African-Americans to seek citizenship in Ghana.

Some 126 Africans in the Diaspora were granted Ghanaian citizenship as part of the Year of Return campaign last November.