Global music superstar Akon, has urged Africans in the Diaspora to invest their talent and resources in Africa to help rebuild the continent.

The “Year of Return’’ has witness many Africans living in the Diaspora take a trip back to the motherland especially as Ghana commemorates the 400th year of the arrival of the first enslaved Africans in Jamestown, Virginia, in what was known as the Transatlantic Slave Trade.

According to the Senegalese-American rapper, the “Year of Return’’ adopted by Ghana, was a good initiative that would strengthen ties with the Africans in the Diaspora and also marks new beginnings that would trigger growth of Ghana and the continent as whole.

“It’s feels good to be back and it’s more exciting to realize that the United States is paying more attention to Africa. Sometimes as an African-America you feel something is missing until you come back to Africa to find that missing puzzle and know your true history.

“The hospitality is amazing and I think it’s gradually getting to the point where many Africa-Americans would think about relocating and invest their talents and resources in Africa and I believe we can rebuild the continent in no time.

‘’Just start now, it doesn’t matter how small the idea is but I guarantee in the coming years that idea is going to be a multi-million-dollar idea because lots of people would share into it,’’ Akon said at a presser.

He lauded the efforts of Hollywood star Boris Cudjoe who has played a crucial role in making the “Year of Return” a great success.

Akon was grateful to Ghanaians for their support and revealed the significance and symbolic nature of launching his “Akonda’’ Afro-beats album around the “Year of Return’’ which according to him would help expand the Afro-beats markets and help people know more about Africa. 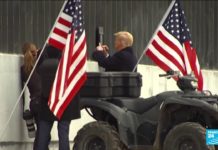