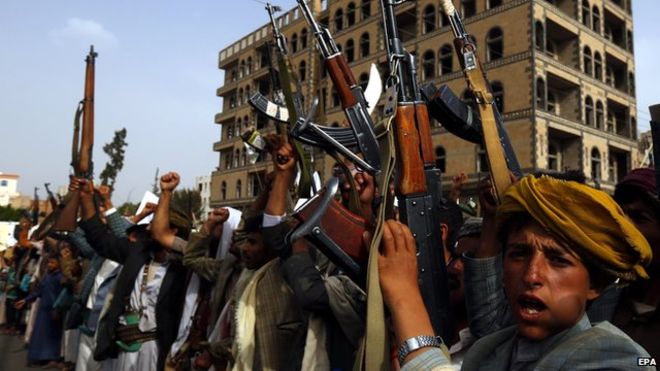 In a small and unfurnished room on the northwestern outskirts of the capital Sanaa, Nasreen Ali, a 24-year-old newly-graduated student, has settled after the raging war forced her to leave her birthplace and travel from a city to another for two years.

She does not have money to buy food or support herself, she said, adding that it is only one of many problems the war caused and deepened.

“I am looking for a safe refuge as I am being treated as a stranger in my own country. The war has not only destroyed our properties and taken jobs, but also deepened hatred and regionalism,” she said.

“Sadly, the war has changed my life completely,” she said, holding tears in her eyes.

Nasreen fled from her city, Taiz, in southwestern Yemen, with her older sister and younger brother in raging battles.

Lately, her siblings left her. Her sister Somaya, a human rights activist, fled to Sudan and lately settled in Jordan.

Nasreen felt not so welcomed in Sanaa, saying that the war has changed people, making them “so aggressive toward citizens from other cities.”

“I wish this chaos ends and peace prevails soon,” she continued with a deep sigh.

After the Houthi-Saleh alliance seized power in late 2014, a fierce civil war broke out which triggered a Saudi-led military intervention in early 2015.

Besides huge economic and humanitarian crises, the war has already created problems that the Yemeni society has not experienced before, including regionalism and sectarianism.

In southern regions under the control of the legitimate government, northerners are being abused and treated as foreigners.

Authorities are tightening measures for their stay and entry into the south, primarily into the temporary capital of Aden.

“After the war, the situation has changed in Aden. I no longer feel safe. People have become unfriendly,” said Samih Mohammed, a 28-year-old taxi driver from Taiz who has been working in Aden for years.

He said that southerners kept telling him “you, people from the north and Taiz, go back to your country. We don’t want you here. We want separation.”

In the south, people have been calling for separation from the north for a long time on the grounds that the national unity is no longer a useful thing.

Sectarian slogans and practices were seen in the north where observers argued that the Shiite Houthi group is seeking to change the usual structures of the state and the society in order to stay in power.

Fuad Alsalahi, a political sociology professor at Sanaa University, said that the conflict in Yemen is politically motivated, but some factions are mobilizing fans for the battles through sectarian and ethnic slogans.

“It is not only that these factions don’t want to lose the war, but also beneficiaries within them who want the war to continue are fueling sectarianism,” Alsalahi said.

As some factions are seeking to mix cards and transfer their battle to the public, as they have been influenced by regional and foreign players and still can’t achieve any political or military victories, Alsalahi said.

“Fragmentation of the social fabric and sectarianism in the form of Shiite-Sunni conflict are worrisome and will represent a huge challenge for peace and stability in the future even after the war ends,” he warned. Enditem