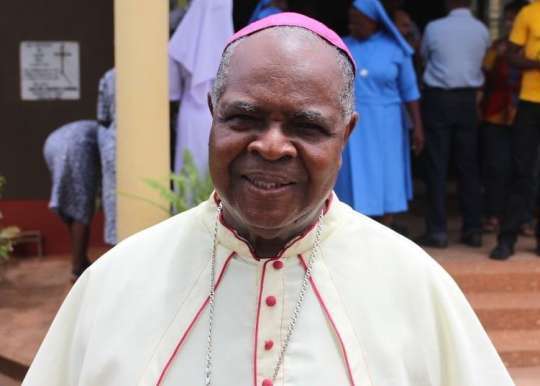 Bishop Vincent Sowah Boi-Nai, Catholic Bishop of the Yendi Diocese has appealed to Mr Kofi Dzamesi, Minister of Chieftaincy and Religious Affairs to help Kingmakers of Dagbon to come out with a clear succession plan.

The plan, he said should clearly spell out the limitations of Regents on the throne, in an event of the death of their fathers, so that action could be expedited on the performance of funerals of the deceased Chiefs.

Bishop Sowah Boi-Nai made the appeal when he delivered a good will message during a meeting of Yendi Peace Council at his residence in Yendi in the Northern Region.

Bishop Sowah Boi-Nai who is the Patron of Yendi Peace Council and Vice Chairman of National Peace Council appealed to the President to liaise with Ya-Na to find amicable peace to Nanton and and perform funerals of pending skins of Dagbon.

The Bishop also called on the security to take action on warning signals, without taking things for granted and on behalf of the Yendi Peace Council called on the people of Kpatigna to give peace a chance for the sake of the women, children and the funds government was spending on security in protecting lives and property there.

He appealed to the government to support the displaced people in Chereponi District and Kpatinga in Gushegu Municipality as they were suffering because of the clashes.

He said the Yendi Peace Council had plans to hold a peace Festival in Yendi this year because of the prevailing peace after the enskinment of Ya-Na Mahama Abukari II, Mion Lana Mahamadu Abdulai, Yo-Na Andani Yakubu Abdulai among others.

He said as part of the festival, there would be debates among schools, Drama and talks about peace, Peace March, and would be climaxed with a durbar in order to help sustain the peace.

He called on the members to continue to be neutral in their work as peace seekers.

Mr Peter Atia the Secretary to the Yendi Peace Council in his remarks thanked the members for the good work they did to restore peace in Dagbon after past 17 years of uncertainty and called on them to sustain the peace.

He reminded them that the Yendi Peace Centre in Yendi was for all parishes in the Diocese and had so far held 160 meetings with different groups including; Chiefs and the security for the past years all aimed maintaining peace in Dagbon.

He called on the Northern Regional Coordinating Council to recognise the efforts of Yendi Peace Council in conflict resolutions and negotiations.

About 2584 candidates are writing BECE in the Yendi Municipality

It is God that chooses leaders-MCE