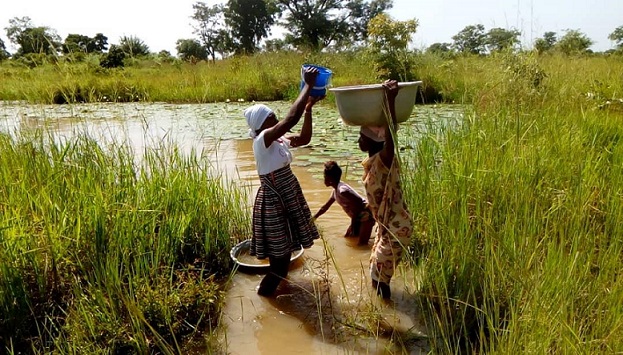 Residents of Yendi Municipality in the Northern Region have been advised to boil polluted untreated water before drinking it to avoid water-borne diseases.

He said drinking unwholesome water without treating it through methods such as boiling was dangerous and could result in the outbreak of water-borne diseases such as cholera, diarrhea, typhoid amongst others.

He advised in an interview with the GNA at Yendi on the effects of drinking unwholesome water, following the water shortage confronting residents of the Yendi Municipality.

There is an acute water shortage in the Yendi Municipality, a situation, which has forced residents to search for the commodity from all manner of sources including polluted dams for consumption and other activities.
Most residents now carry yellow gallons (Kuffour gallons) on motorbikes and motorkings (tricycles) in search of water.

The situation has arisen because of the drying up of River Dakar, which is the main source of water for the residents, leaving them with other unwholesome choices for water.

The situation has created an opportunity for tricycle operators and water tanker service providers, who go to communities to get water and sell it to residents at GHc1 per yellow (Kuffour gallon) gallon, whilst water tankers go for between GHc150.00 to GHc200.00 depending on their sizes, and a drum of water also goes for GHc5.

Hajia Falila, a food vendor at Yendi main town complained about the situation, saying food vendors in the municipality now used the untreated water delivered by motorking operators and water tanker service providers to prepare the food they sold to members of the public.

Mr Mohammed Nuhu, a resident, was not happy that whilst the water sold to residents was unwholesome, it was also expensive.

There are pockets of open defecation in the Yendi Municipality leading to fears that the water crisis, which began more than a month ago, has forced residents to look for water from all manner of sources, and some consuming it without treating it.

GNA’s checks from the Yendi Municipal Disease Control Office showed that even though the water crisis was a perennial issue in the area, it had not recorded water-borne diseases such as cholera, typhoid, and intestinal infections in recent years.

Meanwhile, some residents appealed to the government to expedite action on work on the Yendi Water project to avert the situation in the future.

GFGF scholarship recipient advised to make good use of opportunities