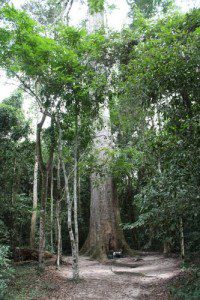 HIDDEN TREASURES OF THE GOLD COAST

?A LOOK AT GHANA?S UNTAPPED RESOURCES

?I don?t look down on tourism. I live in Hawaii where we have 7 million visitors a year. If they weren?t there, there would be no economy. So I understand why a tourist economy is necessary?. Paul Theroux

This week?s tourist attraction may be unknown to some readers. That would not be surprising since it was new to the Hidden Treasures team when the name was mentioned. Nonetheless, that is the very reason the tourist attraction is featuring this week.

Similar to most attractions in Ghana, particularly those that have featured on this page, this tourist attraction is not devoid of myths and spiritisms. It is part of what gives the attraction its identity, regarding its location.

The Big Tree, is considered to be the biggest tree in West Africa. It is located in the forest of Akim Oda. Its girth, diameter and circumference along with its features and other abilities will leave tourists and readers amazed.

Not to take the wind out of its sails, join Hidden Treasures as we visit ?the Big tree?, a spectacular sight that is characteristic of its home country, Ghana? Enjoy?

The big tree is one of the prominent, astonishing and outstanding tourist attractions in the Birim Central and for that matter Ghana. It is located in one of the District?s nine forest reserves, called the Esen Apam Forest Reserves, about 22 kilometers from Akim Oda on the Oda-Agona Swedru trunk road.

Growing in the forests of Akim Oda in Ghana?s Eastern region, the tree known locally as ?the Big Tree? is of the Bako species and its botanical name is tieghemela heckle. The Baku species of plants are both biologically and economically endangered and threatened with extinction in the wild.

The few available species are conserved through management intervention. This is because of the high demand of that unique type of tree species due to its durably hard and unusual cylindrical shape.

The tree also has a low natural regeneration success rate which has also contributed to the likelihood of its extinction.

Its unique nature has led to the intervention by the Ghana Forestry Commission. This magnificent tree is believed to be about 350 to 400 years old. Surprisingly, the tree has a unique feature of a cylindrical shape with a thick grey bark and is longitudinally ridged with slash bright pink leaves. This makes it a unique tourist attraction in the region and the country as a whole.

The tree serves as a heritage object and an object of worship and has been reserved over the years.

Typical of the African setting, especially Ghana, many spiritual myths surround the existence of the tree. It is believed that the tree was first discovered by a hunter named Yaw Andoh from Akim Asanteman, several years past.

Several attempts made to cut and/or uproot the miraculous tree has resulted in casualties for the victims. Legend has it that, traditionalist from Akim Asanteman who attempted to cut the tree down, died a few days after the attempt.

In the year 1930, a farmer who also attempted to burn the tree by setting fire around it, died later.

In 1966 however, a chain saw operator by name Antieh is said to have succeeded in cutting down the tree but it was believed to have mysteriously reinstated to its original position after three days. The operator is believed to have died later on.

After all the mysterious events, the tree is now an ancestral home for the people of Akim Asanteman. It is also a spectacular tourist attraction in the country. The tree is a holy site where natives of Akim Asanteman pay homage to their ancestors and the spirit of the tree during their annual festival.

It would interest you to know that during all these years, the tree has attracted people from different parts of the world, especially the Asian Continent and India to be specific.

According to the authorities, these foreigners visited at the time to purposely perform rituals and seek spiritual help. The mysterious tree is a durable and hard wood which is also resistant to impregnation and surprisingly resistant to insects and disease attacks.

The tree is an impressive tourist attraction sees many local and foreign visitors visiting in efforts to see the spectacular gift of nature and have first-hand information on the biggest tree in West Africa.

It is also believed that infertile women can conceive when they use the leaves and the bark of the tree as herbs.

On the way to the town of Oda we ventured out into the jungle a few hundred yards to see this big tree.   It is the biggest tree in western Africa.  The pictures do not do it justice as to it?s size.   It was ?huge?.  I think it was over 80 feet around and a couple of hundred feet high.   It was discovered over 400 years ago.  There are a lot of rituals and superstitions surrounding this tree.   One of them is that if you run around the tree three times it will change your gender.   Neither one of us wanted to give it a try.    Another one is if you go there and make a wish or request and then leave some wine it will come true.   There were many bottles of wine all around the trunk.