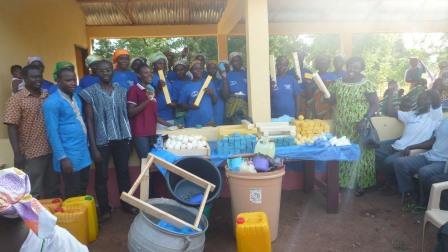 The Northern Sector Action on Awareness Center (NORSAAC) has held a review workshop to assess emerging issues regarding ensuring decent work and enforcement of women?s rights at the workplace since its implementation of ?The Young Urban Woman: Life Choices and Livelihood Project.?


The workshop was also to showcase Ghana Progressive Hairdressers and Beauticians Association (GHPABA) as a model organization that adhered to standards of working conditions and fulfillment of women?s rights/decent work at the workplace as well as promote healthy competition among actors in the non-formal sector to adhere to the International Labour Organisation?s standards for decent work.

NORSAAC, a Tamale-based non-governmental organization, has been implementing ?The Young Urban Woman: Life Choices and Livelihood Project? since 2013 in the Tamale Metropolis with funding from the Norwegian Development Agency.

The project aims to empower 2,000 young urban women from 15 to 25 years in Accra and Tamale to break the chain of poverty in their families and communities through more economic independence and control over their bodies, and for their voices to be heard and recognised in international fora.

Speaking at the workshop in Tamale, Madam Abubakari Hawa, Vice President of GHPABA said the constitution of GHPABA had been reviewed to include a new article (article 17) on rights of apprentice to conform to standards for decent work.

Madam Abubakari said the decision to review the constitution followed the earlier training organized by NORSAAC in September last year where it was realized that there was need to adhere to standards of working conditions and fulfilment of women?s rights/decent work at the workplace.

Mr Karim said GNTDA had adopted the tenet of decent work adding its members were implementing the tenet at their various workplaces by having more defined working hours, remuneration for apprentices? overtime, sexuality education and channels for reporting sexual harassment.

Miss Abdulai Memunatu, a Young Urban Woman from Dabokpa also said that the September, 2014, training saved her from a dire situation of economic exploitation by her then master, where she was learning dressmaking.

Ms Abdulai was supposed to have passed-out three years ago but her master kept postponing the passing out ceremony but through the intervention of GNTDA after NORSAAC?s September 2014, training, she recently graduated.

Ms Abubakari Kawusada, Coordinator of NORSAAC?s ?The Young Urban Woman: Life Choices and Livelihood Project? said it was unfortunate that most players in the informal sector had less opportunity and skills on the Labour Act and human rights yet majority of the people including young women earned their living through the sector.

She said the project, therefore, was complementing the capacity gap in the informal sector to provide associations, managers and owners of businesses and skills centres in the non-formal sector the requisite skills to create an enabling environment for people to earn a decent livelihood.