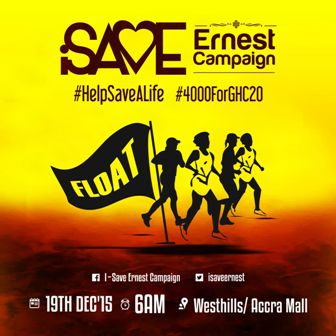 A group of youngsters will engage in a myriad of activities to solicit funds from the general public in support of one Ernest Baah, who is suffering from end-stage kidney disease. Led by the support team, known as I-SAVE ERNEST Campaign, the group numbering will converge at the Accra Mall as well as the West Hills Mall, Kasoa on 19th December, 2015 in the early hours of that Saturday morning.

This is borne out of their zeal to support the said patient who is listed for a kidney transplant in India.

According to the conveners of the campaign team, it intends to among other means support the family of Ernest Baah to raise the target amount of GHC 96,000 needed for the surgery. In a recent development, a musical concert held in Tema Secondary School, alma mater of the victim saw donations and contributions to support the course.

The street event is expected to see a large number of students and youths at these venues as they show support to the victim through fundraising. The general public is hereby invited to join and support this occasion. Call 0240314953, 0241073605 or 0206718697 for more details.