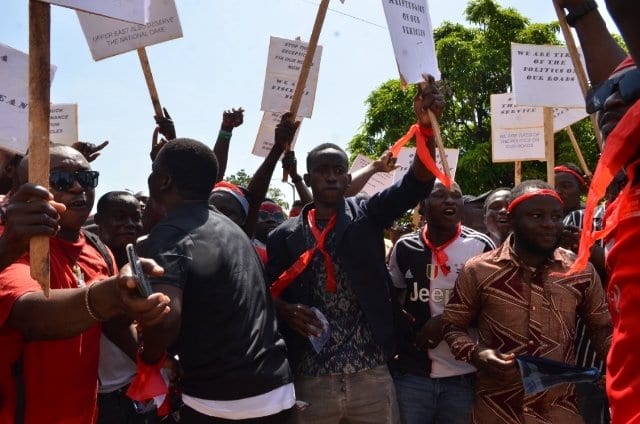 The Movement for Upper East Development, a youth group in Bolgatanga, are on a demonstration on major streets of the Municipality to register their displeasure over poor road network within the Municipality.

The group, clad in red, started the demonstration from the Bolgatanga East District and moved into the Municipality on Wednesday morning, communicating their displeasure through placards with various inscriptions.

Some of the messages on the placards included “Too much maintenance on our vehicles, Bolga beyond patching,” “Fix Bolga roads now,” “Upper East also deserves the national cake,” “We are also Ghanaians, no airport, no stadium, bad roads,” “Fix our streets lights now,” “Stop the lip Service” among others.

Mr Paul Honkani, Convenor of the demonstration, in an interview with the Ghana News Agency (GNA), said the Region was neglected and lagged behind other Regions in the Country.

“We have noticed that if we don’t stand up as youth, as brilliant minds and as people who have the welfare of the Region at heart, we will always be left behind in the development process.”

He said the roads were part of several issues they were “fighting for,” and indicated that the roads were paramount among their grievances because its poor nature caused several accidents that led to loss of lives and miscarriages in some pregnant women.

Mr Honkani said even though the Bolgatanga Township roads were of concern to them, their emphasis was on the Bawku-Bolgatanga-Pulmakom stretch of road, which linked neighbouring countries such as Burkina Faso, Niger and Togo.

Mr Honkani said they would continue to embark on series of demonstrations that would make politicians and stakeholders uncomfortable if their demands were not met.

Madam Patience Agetame, one of the demonstrators, who spoke to the Ghana News Agency (GNA)said “we are on this demonstration to demand from government, our potion of the national cake. We are also Ghanaians we have malfunctioning street lights over the Municipality only one set of traffic lights in the entire Municipality. That’s not fair.”

Some tricycle Riders, popularly known as ‘Mahama Canboo’, who spoke to the GNA, said they were suffering, because of the deplorable roads and called on the Assembly to improve on the town roads.