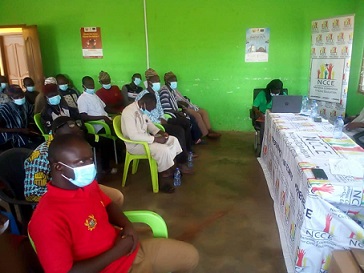 The North East Gonja District Directorate of the National Commission for Civic Education (NCCE) has sensitised relevant stakeholders in the area on violent extremism as part of efforts to prevent its occurrence in the country.

The event, held at Kpalbe, the District Capital in the Savannah Region, formed part of the “Preventing Electoral Violence and Providing Security to the Northern Border Regions of Ghana” project, funded by the European Union to, among other things, counter violent extremism in the country.

It was aimed at equipping participants, especially the youth, with the relevant information on violent extremism and radicalism to help them guard against being recruited to perpetuate violence.

She advised the people to be vigilant in their communities to help pick information and report to the security agencies to deal with persons planning such activities.

Mr Bagbin emphasised the need for peaceful coexistence and national cohesion amongst residents to promote development.

Mr Joseph Haruna, a retired NCCE Director, educated the youth on the Public Order Act and peacebuilding mechanisms, and urged participants to follow the laid down procedures to ensure law and order in the District.

Alhaji Siba Issah, the Chief Imam of Kpalbe, advised the youth to respect elders, be law abiding, learn the teachings of Allah and desist from any criminal acts.

Participants pledged to share lessons learnt during the forum with members of their communities to ensure they would all be on the look-out for any suspicious elements to foil their extremists activities.