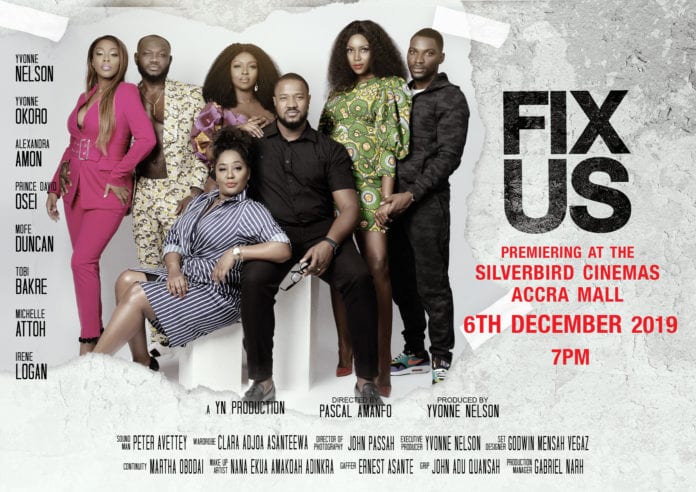 It will premiere at the Silverbird Cinemas at the Accra Mall on December 6 from 7pm.

It also features Hajia4real and musician, Irene Logan who are starring in a movie for the first time.

Fix Us tells the story three young ladies who take on a journey of faith and fate.

When Naadie (Yvonne Nelson), Chioma (Yvonne Okoro) and Jaya (Alexandra Amon) run into each other at an audition, they are bound by their common dream to be movie stars and form a friendship that can hardly be broken.

But when their dreams are eventually actualized, they soon realise that they want even something more from life.
Something more that money cannot buy.

The movie to some extent highlights what goes on behind the scenes in the lives of some actors.

“Our gift to you this Christmas… The official end of year movie,” Yvonne Nelson said when she announced the movie on Friday.

“Are you ready ? December 6th at the Silverbird Cinemas…A must watch movie..See you there,” Yvonne Okoro also said on Instagram.

“This movie will keep you on your toes.. have you gasping, have you grabbing the arm seats. Book an entire row of seats as soon as the tickets are out,” Michelle Attoh added.

‘INSIDE LIFE’ Movie To Be Premiered On April 10 At Serallio

“Covid-19 is not a movie, It’s real” Says Olla Williams

Pre-Screening Of ‘Jumanji – The Next Level’:MTN readies to thrill customers